Graves destroyed by heavy rain have left families in Oakland distraught. They blame run-off from a nearby development.

OAKLAND, Fla. - The Town of Oakland is apologizing for flooding at a historic African-American cemetery over the weekend.

The final resting place for many at Oakland-Tildenville Cemetery flooded after nearly six inches of rainfall over the last two days. The water unearthing some of the graves. 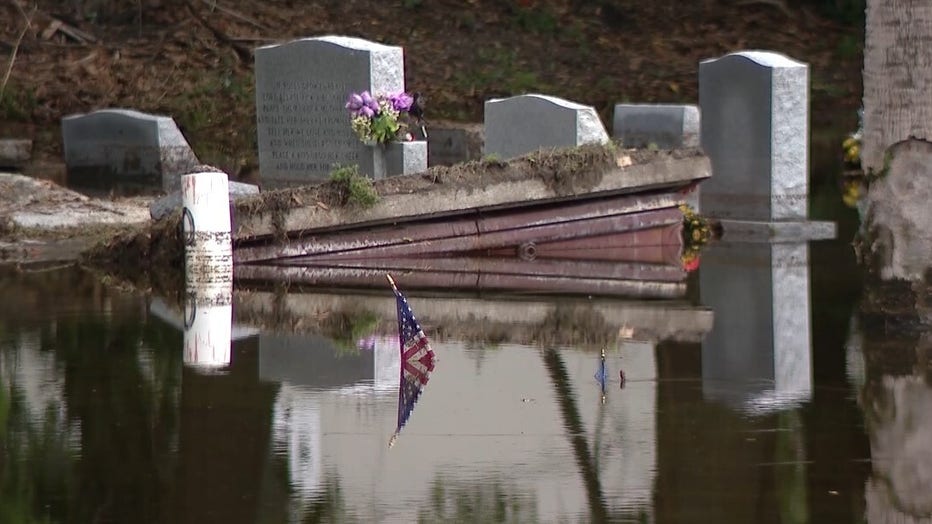 “To be honest, it should’ve never gotten to this magnitude,” Keshanda Bridges, who also has loved ones buried at the cemetery said. Family members said the flooding is a new problem at the cemetery. They blame a drainage pipe connected to a nearby housing development.

“This is not a peaceful rest when you are four or five or six inches under actual water,” Bridges said.

MORE NEWS: National Coffee Day 2020 deals: What to do to get that free cup

A spokesperson from the Town of Oakland says the pipe could be part of the problem and that it has been plugged.

Workers from the development spent the morning pumping water out of the cemetery as family members watched. They said this will not solve the problem.

The Oakland-Tildenville Cemetery is historic and is home to several generations of African-Americans from the community.

The town said it has met with the cemetery board to apologize for the flooding. It plans to meet with the families at a later date, but some family members said that’s not enough.

“It just magnifies, just another example of how African-Americans are treated in this country because this would just never happen in other places and it’s disgusting,” Bridges said.

The people FOX 35 spoke with said the best way to fix the problem is to give them money for the damages so they can have their loved ones buried somewhere else.