WASHINGTON - An advisory panel for the U.S. Centers for Disease Control and Prevention is meeting this week to discuss who should get Pfizer-BioNTech’s COVID-19 booster shot — and when they should receive it.

The CDC’s Advisory Committee on Immunization Practices (ACIP) convened Wednesday to review data on the safety and effectiveness of Pfizer’s booster dose, according to a meeting agenda. The meeting, which will continue Thursday, is being streamed online.

The ACIP meeting comes on the heels of a Sept. 17 vote by the U.S. Food and Drug Administration’s advisory panel, which overwhelmingly rejected a plan to give the Pfizer COVID-19 booster shot to all Americans age 16 and up.

Instead, the FDA’s influential committee of outside experts endorsed the extra vaccine dose only for those who are 65 or older or run a high risk of developing severe COVID-19. The FDA itself still has to decide whether it agrees with its advisers’ recommendation and will authorize Pfizer boosters.

If the FDA gives its official approval, which could come this week, the CDC must then recommend who should get the extra shots after hearing from its own ACIP panel. 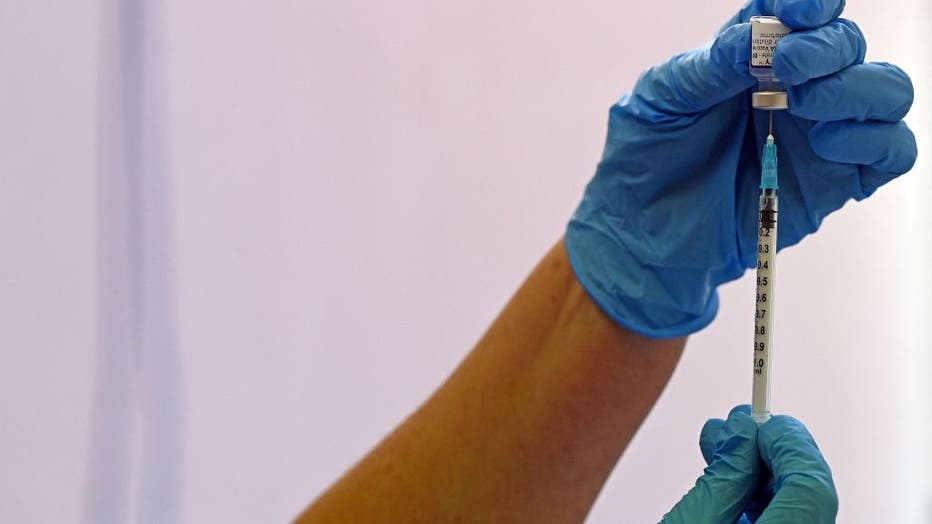 FILE - A nurse prepares a dose of the Pfizer-BioNTech COVID-19 vaccine at a vaccination center on Sept. 20, 2021, in Derby, England. (Photo by PAUL ELLIS/AFP via Getty Images)

The question of who belongs in the high-risk group to potentially receive the extra jab is one of several topics being considered by the CDC’s panel this week. It will also discuss vaccine effectiveness studies currently happening in the U.S. and look at data from those already receiving booster shots, the meeting agenda shows.

While the COVID-19 vaccines continue to offer strong protection against severe illness, hospitalization and death, immunity against milder infection seems to be dropping months after vaccination. The U.S. has already approved both Pfizer and Moderna boosters for certain people with weakened immune systems, such as cancer patients and transplant recipients.

The CDC has said it is next considering boosters for older people, nursing home residents and front-line health care workers — rather than all adults.

But the priority is still to vaccinate the unvaccinated, who the CDC says account for the vast majority of COVID-19 cases, now soaring to levels not seen since last winter. About 182 million Americans are fully vaccinated, nearly 55% of the total population.

"I want to highlight that in September of 2021 in the United States, deaths from COVID-19 are largely vaccine-preventable with the primary series of any of the three vaccines available," said Dr. Matthew Daley, a researcher at Kaiser Permanente Colorado and CDC adviser who opened Wednesday's meeting.

Another question at the meeting was expected to be about how many months after the second shot the booster should be given. Scientists have talked about six months or eight months.

Dealing the White House a stinging setback, a government advisory panel overwhelmingly rejected a plan Friday to give Pfizer COVID-19 booster shots across the board, and instead endorsed the extra dose only for those who are 65 or older or run a high risk of severe disease.

Experts say it’s normal for virus-fighting antibodies to wane months after vaccination. Even then, the body has back-up defenses against the virus. As a result, many are torn about the need for boosters.

Part of the U.S. government’s calculation is whether preventing "breakthrough" infections in the fully vaccinated could help tamp down virus transmission, protect young children who aren't yet eligible for vaccination and ease the burden on overwhelmed health care systems.

The FDA advisory panel, which voted 16-2 rejecting boosters for almost everyone, cited a lack of safety data on extra doses and also raised doubts about the value of mass boosters — rather than ones targeted to specific groups.

Then, in an 18-0 vote, it endorsed extra shots for people 65 and older and those at risk of serious disease. Panel members also agreed that health workers and others who run a high risk of being exposed to the virus on the job should get boosters, too.

The FDA and CDC will also most likely decide at some later point whether people who received the Moderna or Johnson & Johnson shots should get boosters.

During several hours of vigorous debate, members of the FDA advisory panel questioned last week the value of offering boosters to almost everybody 16 and over.

"I don’t think a booster dose is going to significantly contribute to controlling the pandemic," said Dr. Cody Meissner of Tufts University. "And I think it’s important that the main message we transmit is that we’ve got to get everyone two doses."

Dr. Amanda Cohn of the CDC said, "At this moment it is clear that the unvaccinated are driving transmission in the United States."

The votes dealt a blow to the Biden administration’s effort to offer booster doses to most Americans, looking to shore up protection amid the spread of the highly contagious delta variant — fueling new cases and hospitalizations.

President Joe Biden’s top health advisers, including the heads of the FDA and CDC, first announced plans for widespread booster shots in mid-August, setting the week of Sept. 20 as an all-but-certain start date. But that was before FDA staff scientists had completed their own assessments of the data.

President Joe Biden will get COVID-19 booster on camera

During Monday morning's press briefing, White House press secretary Jen Psaki said the president plans to get his COVID-19 booster shot on camera but did not say when.

Last week, two top FDA vaccine reviewers joined a group of international scientists in publishing an editorial rejecting the need for boosters in healthy people. The scientists said continuing studies show the shots are working well despite the delta variant.

U.S. Surgeon General Dr. Vivek Murthy said the White House’s booster shot announcement was not aimed at pressuring regulators to act but was instead an attempt to be transparent with the public and be prepared in the event that boosters won approval.

"We have always said that this initial plan would be contingent on the FDA and the CDC’s independent evaluation," Murthy said on Sept. 17.

The U.S. booster plan has also raised ethical concerns about the fate of people in impoverished parts of the world. But the administration has argued that the plan is not an us-or-them choice, noting that the U.S. is supplying large quantities of vaccines to the rest of the globe.