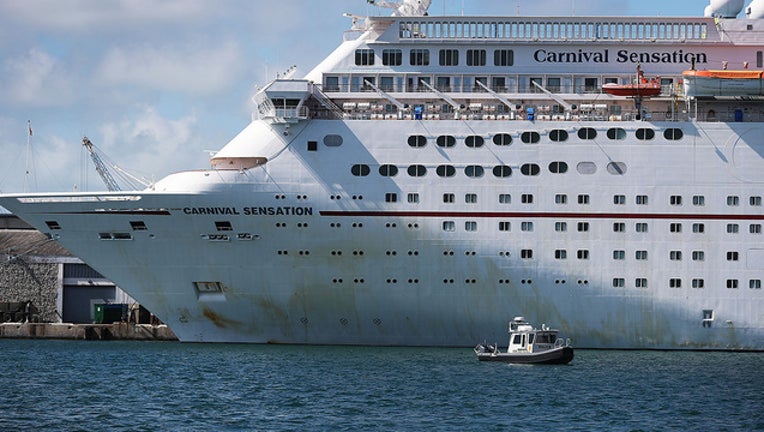 The Carnival Sensation cruise ship is seen at PortMiami on April 18, 2019 in Miami, Florida. (Photo by Joe Raedle/Getty Images)

MIAMI (AP) - Carnival Corp. executives pledged anew Friday that steps are being taken to curb ocean pollution, which was the subject of a recent $20 million federal penalty imposed because of continued environmental violations.

Carnival outlined some of those steps at a hearing before a pair of skeptical Miami federal judges. CEO Arnold Donald says the world's largest cruise line is embracing a new culture of compliance with environmental laws from the top down.

"Our people have embraced this. They want to do the right thing," Arnold said. "We absolutely recognize the importance of this."

Last month, Carnival admitted violating probation from a 2016 criminal pollution case - it paid a separate $40 million fine at the time - as its ships continued to cause environmental harm around the world since then. Similar promises were made years ago by Carnival that things would change but it appears little did, Senior U.S. District Judge Patricia Seitz said.

Seitz urged the company, which remains on probation for three more years, not to revert to its past practices regarding environmental protection.

"I'm concerned that what I'm seeing is a lot of paperwork and not a lot of philosophy and leadership," Seitz said. "Where is your commitment to our world?"

Carnival operates more than 100 ships across nine brands around the globe, sailing to more than 700 destinations. Authorities say its ships have committed environmental crimes such as dumping "gray water" in prohibited places such Alaska's Glacier Bay National Park and knowingly allowing plastic to be discharged along with food waste in the Bahamas, which poses a severe threat to marine life.

The company also admitted falsifying compliance documents and other administrative violations such as having cleanup teams visit its ships just before scheduled inspections.

At Friday's hearing, several Carnival executives outlined various plans in the works to improve environmental compliance. One of those initiatives is creation of pro-compliance video based on the "The Cupid Shuffle" line dance in which staff on Carnival ships would be encouraged to create their own version as part of a contest.

"We're not there yet, but we're headed in the right direction," Anderson said. "In the next three years, we will be world class."

Federal prosecutors complained that in its zeal Carnival is almost providing too much information about relatively minor incidents, such as a slice of pizza falling off a customer's plate into the water and another customer feeding bread to seagulls. They asked Carnival to focus only on the bigger issues.

"We no longer want to hear whether a passenger fed a seagull a piece of bread," said U.S. District Judge Ursula Ungaro, who will take over the case from Seitz in the coming months.