WASHINGTON - The Biden administration on Friday blocked a request by former President Donald Trump to withhold some documents from Congress related to the Jan. 6 attack on the U.S. Capitol, setting up a legal showdown between the current and former presidents over executive privilege.

White House Press Secretary Jen Psaki confirmed that President Joe Biden determined an assertion of executive privilege "is not warranted" for the first set of documents from the Trump White House. She added that it’s an "ongoing process."

"We will evaluate questions of privilege on a case by case basis," Psaki said.

A House committee is investigating the roles of Trump and his allies in the run-up to the riot when a large mob of Trump supporters broke into the Capitol as Congress was certifying the results of the presidential election won by Biden. The committee is rapidly issuing subpoenas to individuals who are either connected to Trump or who helped plan the massive rally on the morning of Jan. 6 at which he told his supporters to "fight like hell." 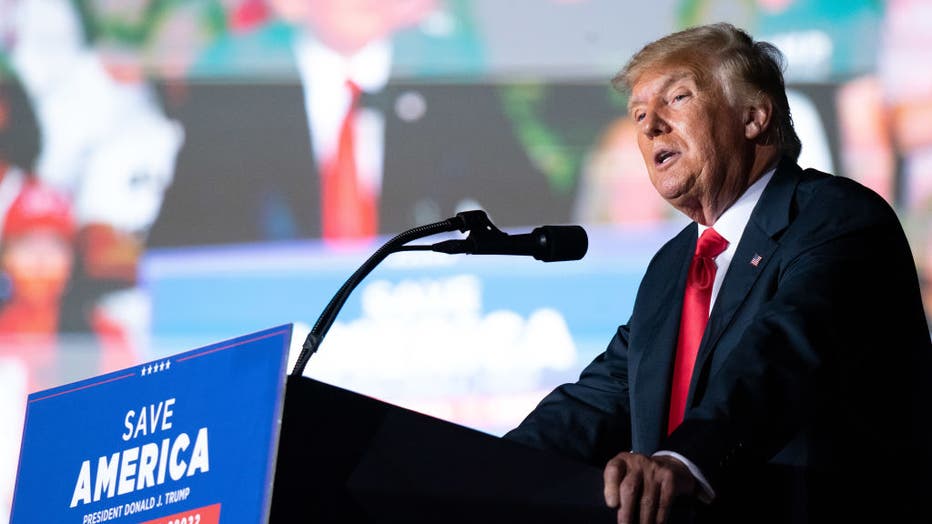 FILE - Former US President Donald Trump speaks at a rally on Sept. 25, 2021, in Perry, Georgia. (Photo by Sean Rayford/Getty Images)

A lawyer for Steve Bannon, a former White House aide who was subpoenaed, has said he won't comply with the House committee's investigation because Trump is asserting executive privilege to block demands for testimony and documents.

Thompson and Cheney issued a statement Friday after a deadline for document production had passed.

"Though the Select Committee welcomes good faith engagement with witnesses seeking to cooperate with our investigation, we will not allow any witness to defy a lawful subpoena or attempt to run out the clock, and we will swiftly consider advancing a criminal contempt of Congress referral," the two lawmakers said.

Bannon’s refusal to comply, and Trump’s vow to litigate the testimony, will mean certain delays in the panel's probe. But members of the committee, several of whom worked as prosecutors on Trump's two impeachments, were prepared for the possibility and have repeatedly threatened to charge witnesses with contempt.

Trump often successfully fought witness testimony during his presidency but may find his legal standing shakier now that he is out of office.

A committee effort to charge witnesses with contempt would likely involve a vote of the full House and a referral to the Justice Department. It would then be up to Justice how to proceed with charges.

Bannon's lawyer, Robert Costello, said in an Oct. 7 letter to the panel that until the issues over privilege are resolved, "we are unable to respond to your requests for documents and testimony."

Costello wrote that Bannon, a former aide to Trump who had contact with him the week of the Capitol attack, is prepared to "comply with the directions of the courts" when and if they rule on the issue.

The letter includes excerpts from a separate letter sent to Bannon by Justin Clark, a lawyer for Trump. Clark says documents and testimony provided to the Jan. 6 panel could include information that is "potentially protected from disclosure by executive and other privileges, including among others the presidential communications, deliberative process and attorney-client privileges."

Clark wrote to Bannon that "President Trump is prepared to defend these fundamental privileges in court."

Spokespeople for Trump have not returned messages seeking comment. Trump said in a statement last month that he would "fight the Subpoenas on Executive Privilege and other grounds, for the good of our Country."