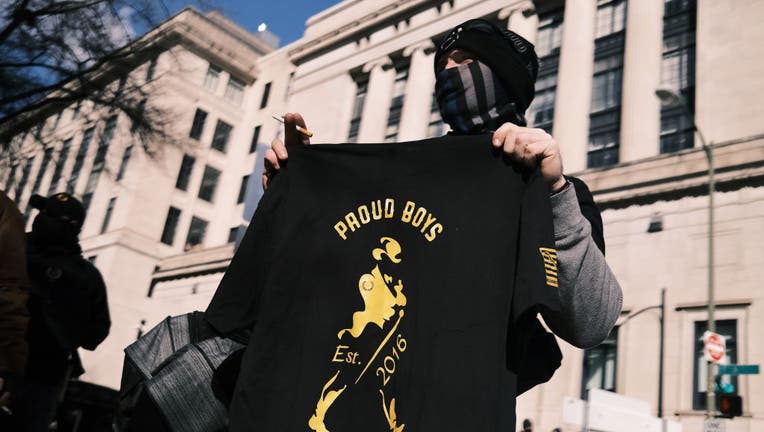 RICHMOND, VA - JANUARY 18: A man holds up for sale a "Proud Boys" T-shirt, referring to the far-right political organization that promotes and engages in political violence, near the state Capitol on January 18, 2021 in Richmond, Virginia. There is h

FRESNO, Calif. - A Fresno police officer who is under investigation after being captured in photos and video at a protest with members of the far-right Proud Boys group has been put on leave, officials said.

Fresno Police Chief Paco Balderrama launched an internal affairs investigation after police became aware of the photos and footage, the department said in a statement Sunday. The statement did not identify the officer by name. The California Peace Officer Bill of Rights prohibits police from naming the officer.

The Fresno Bee reported Officer Rick Fitzgerald was spotted Sunday in a livestream by Eddie Block, a Madera man who is a former Proud Boy and whose home was raided by the FBI after he was seen at the Jan. 6 Capitol insurrection. Others also posted photos of Fitzgerald joining the Proud Boys to counter-protest the sale of the iconic Tower Theatre to a church.

Lt. Rob Beckwith later said the officer was placed on paid administrative leave and his police officer powers were temporarily suspended during the investigation.

"Any allegations of actions unbecoming of a police officer or the affiliation with any alleged criminal or hate group will always be investigated and addressed. Fair and impartial policing are extremely important in our society. There is no place in our police ranks for any biased, racists, or anti-Semitic views," Balderrama said in the statement.

Fresno Mayor Jerry Dyer, who was the city’s police chief for 18 years, said action will be taken if any misconduct is found.

"These images are extremely disturbing and are being taken very seriously," Dyer posted on Twitter. "As the mayor of this city, I will not tolerate any city of Fresno employee belonging to organizations that promote views of supremacy, racism or criminal conduct."