Two Marines with Southern California ties among those killed in Kabul

Two service members with local ties were identified as one of the victims in the Kabul airport suicide bombing attack.

LOS ANGELES - A Southern California native has been identified as one of the 13 U.S. servicemembers killed in a suicide bombing attack outside Kabul's airport in Afghanistan on Thursday.

Nikoui graduated from Norco High School in 2019 and served in JROTC. 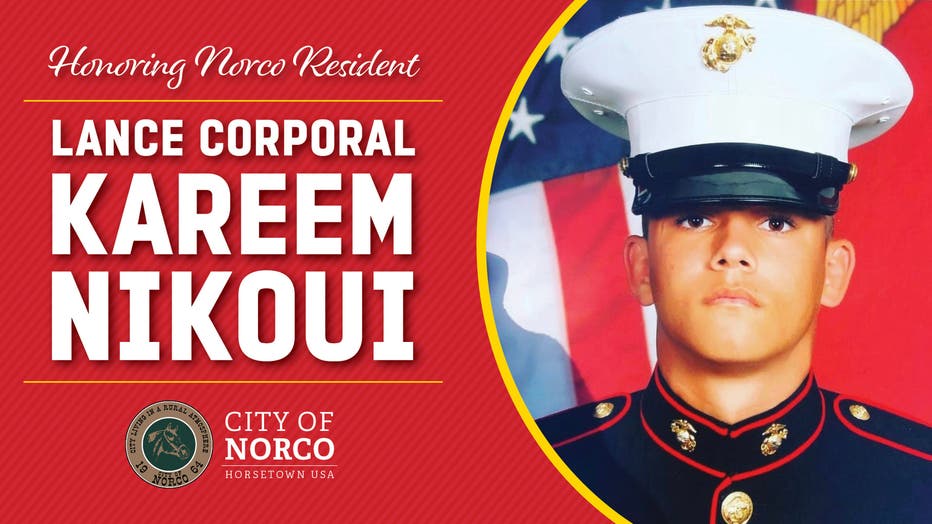 He is one of two SoCal natives identified as one of the victims of Thursday's terrorist attack in Afghanistan. The other SoCal native was identified later Friday as U.S. Marine Corps Corporal Hunter Lopez, the son of Riverside Deputy Sheriff Alicia Lopez and Riverside Sheriff's Captain Herman Lopez.

The city of Norco wrote that Nikoui "was committed to serving his country and is survived by his mother, father and siblings."

Lance Corporal Kareem Nikoui’s name will be enshrined on the "Lest We Forget Wall" at the George A. Ingalls Veterans Memorial Plaza, which honors Norconians who made the ultimate sacrifice while serving our nation. A Gold Star Families Memorial Monument is currently being constructed at the same location, according to city officials.

Wellness Worldwide feeds Afghan refugees and you can help

Sara Manely is a board member for a group of volunteers helping Afghans displaced by the violence caused by the Taliban takeover. The West LA group is raising money to provide food aid to the most vulnerable in areas around Kabul. https://www.wellnessworldwideprojects.org/

"The City of Norco respectfully salutes the service members who paid the ultimate sacrifice in Kabul, Afghanistan, and our thoughts and prayers are with their families during this difficult time," the city wrote.

Thursday's bombing — blamed on Afghanistan’s offshoot of the Islamic State group, a lethal enemy of both the Taliban and the West — made for one of the deadliest days in the two-decade Afghan war.

Two officials said the number of Afghans killed rose to 169, one of the country's highest death tolls in a terror attack. The U.S. said it was the most lethal day for American forces in Afghanistan since 2011. The number of dead was subject to change as authorities examined the dismembered remains.