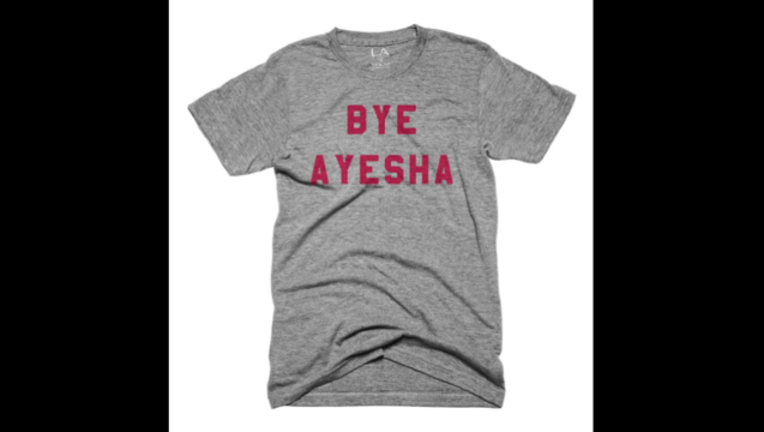 OAKLAND, Calif. (KTVU) - An Ohio-based apparel store is cashing in on a new T-shirt that takes aim at Ayesha Curry.

Printed across the T-shirts are the words "Bye Ayesha," making reference to a line from the 1995 movie "Friday," starring Ice Cube.

The owner of Lamp Apparel said  the idea came to him as he talked basketball with his friend on the morning of Game 7 on Sunday.

Brandon Fuss-Cheatham says that he and his buddy were discussing the NBA Finals and the side-stories that have come out of the series, including the attention Ayesha Curry has received for her tweets.

One tweet, which was later deleted suggested that the games were "rigged'' after her husband fouled out and then was ejected during Game 6.

Fuss-Cheatham says that as soon as the "Bye Ayesha" idea was conjured, he knew that he had to get the shirts made-- immediately.

"By the time it came out of our mouths to when the shirts were made, it took about 30 minutes."

The 33-year-old business owner says that he got the shirts made and crossed his fingers that Cleveland would win.

As soon as the Cavaliers won the championship, the shirts became an instant hit.

As for Ayesha Curry, she later apologized for her controversial Game 6 tweet and did not shy away from taking to Twitter again after the Warriors crushing loss on Sunday. In a tweet, she expressed her pride for her husband's team.