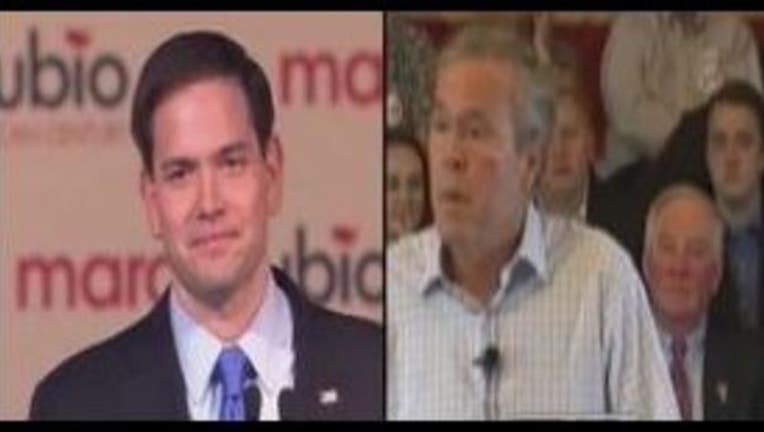 WASHINGTON - WASHINGTON (AP) — Republican presidential candidate Jeb Bush collected $13.4 million in recent months for his White House campaign, while competitor Marco Rubio ended September with more available cash in the bank despite having raised less than half as much.

The campaigns filed their latest fundraising reports, covering July 1 to Sept. 30, to the Federal Election Commission on Thursday. The campaigns for the two Floridians — in an increasingly heated contest for traditional Republican donors — sought to emphasize their advantages over each other.

Bush, the former Florida governor, ended September with about $10 million in cash. Rubio, the state's junior senator, raised $5.7 million in the third quarter and began this month with $11 million in the bank, though about $1 million of that can't be accessed unless his wins the Republican nomination.

By several measures, neither is leading the GOP fundraising race. Donations to the candidates appears to be reflecting what's showing up in summertime preference polls — outsiders and political rookies hold a particular appeal.

Retired neurosurgeon Ben Carson took in $20 million during the same time period. And Texas Sen. Ted Cruz, a constant thorn in the side of GOP leaders in Congress, raised $12.2 million. That's slightly less than Bush, yet as of Sept. 30, Cruz had several million dollars more in the bank than either Bush or Rubio.

"Together, we have begun to build an organization that we are confident will deliver the Republican nomination and win the White House," Bush's campaign manager Danny Diaz wrote in a memo to supporters on Thursday.

"This is particularly noteworthy given the depth of the current field," he wrote. "We knew from the start this was going to be a hard fought and close race, but few could have anticipated just how volatile this field would be."

Bush's allies said his monetary advantage over the others balloons when super PACs are taken into consideration.

Those groups — which, unlike campaigns, can accept unlimited contributions from donors — cannot formally work with the candidates, but are stacked with trusted advisers. And Bush helped raise a record $103 million for his super PAC, Right to Rise, in the first six months of the year, before he officially became a candidate.

That's more than twice what any other Republican outside group had amassed by June 30, according to the most recent fundraising reports available for super PACs. By comparison, the two groups backing Rubio had collected at least $32 million by then. Super PACs don't file new reports until the end of January.

Bush's reliance on the group is evident in his own comments.

Right to Rise has been advertising heavily for Bush, and on Thursday the group announced a $16.8 million TV campaign plan for states that will cast primary votes in March — evidence, the group says, of its long-term approach to helping Bush secure the nomination.

"Any edge doesn't matter much at all. You've got to add the super PAC totals into it," said Charlie Black, a veteran Republican strategist who said he is staying neutral in the primary.

The super PACs aren't required to file updated fundraising reports with federal regulators until the end of January.

Of the campaigns themselves, Black said, "If they have an organization on the ground, can move the candidate around and have a press shop, that's all they really need to do."

"He's advertising. He's working away. And he's building the best organization," Gidwitz said. "We're perfectly positioned for the primaries and caucuses when the time comes."

Rubio's campaign, meanwhile, cheered its own thriftiness and emphasized its cash advantage over Bush.

"Thanks to smart budgeting and fiscal discipline, Marco Rubio for President started October with more money in the bank than Jeb Bush for President and most other campaigns," the Rubio campaign said in a statement.