Police are investigating the cause of a charter bus that lost control and crashed into a building in Lake Nona. It happened off Veterans Way by Chopra Trail.

ORLANDO, Fla. - Orlando Police are investigating the cause of a crash in which the driver of a charter bus lost control of the vehicle and slammed into a building in Lake Nona.

It happened during a busy lunch hour on Thursday afternoon off Veterans Way by Chopra Trail.

It looks like a scene from a movie set, after rescuers say, a charter bus knocked down some trees, struck a parked car, then crashed into the Signature Office Center in the Lake Nona Town Center.

"I ran behind him, to see people were getting out of the way," explained witness Frank Pulice. "It was a pretty loud noise and caught our attention." 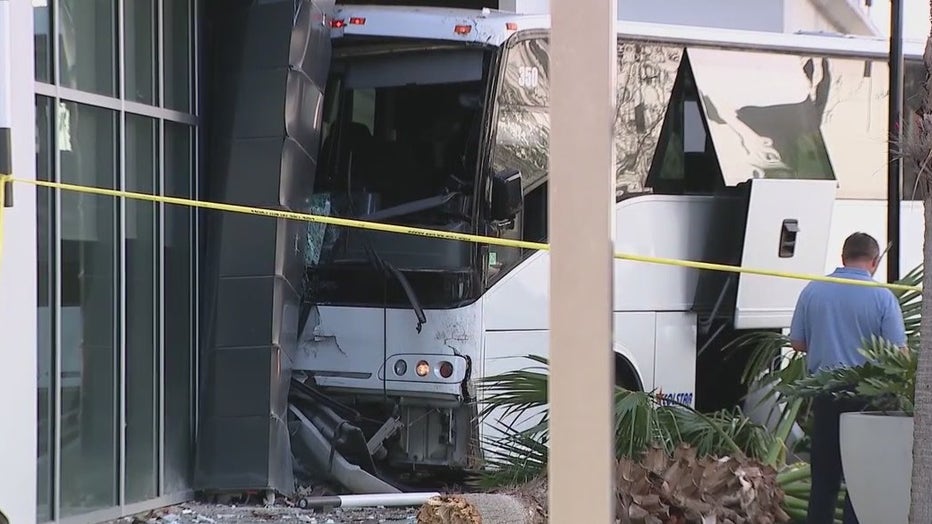 Something else also caught their attention. Witnesses said actress Goldie Hawn and her driver were in the black SUV that got hit by the bus, but they got out ok.

While we're still trying to confirm this, we know she was scheduled to speak at a forum in Lake Nona.

Frank added, "I’m a big fan, Death Becomes Her is one of my favorite movies."

Firefighters said three people on the bus were taken to the hospital with minor injuries.

"A guy broke his arm and a couple of people got bruised up," Imhoff said.

I know someone had an arm injury and was rushed to the hospital and a lot of other people were just shook up.