MOSCOW - Basketball star Brittney Griner, who was sentenced to nine years in a Russian prison on drug possession charges, is growing increasingly nervous about the prospects of being released, her lawyer said.

Griner was in Russia to compete during the WNBA offseason when Russian authorities said she had vape canisters with cannabis oil inside her luggage while traveling through an airport in Moscow in February.

The Biden administration reportedly talked about a potential prisoner swap to free her and another American held in a Russian jail, Paul Whelan. But Griner's lawyer, Alexandr D. Boykov said he spoke with her Tuesday and said she is far from hopeful.

"She is not yet absolutely convinced that America will be able to take her home," Boykov said in an interview with the New York Times. "She is very worried about what the price of that will be, and she is afraid that she will have to serve the whole sentence here in Russia."

Another growing concern for Griner is the condition of the prison she may end up in, Boykov noted. She said she is only outdoors once a day and is forced to spend the remainder of her time in a small cell with two other prisoners. 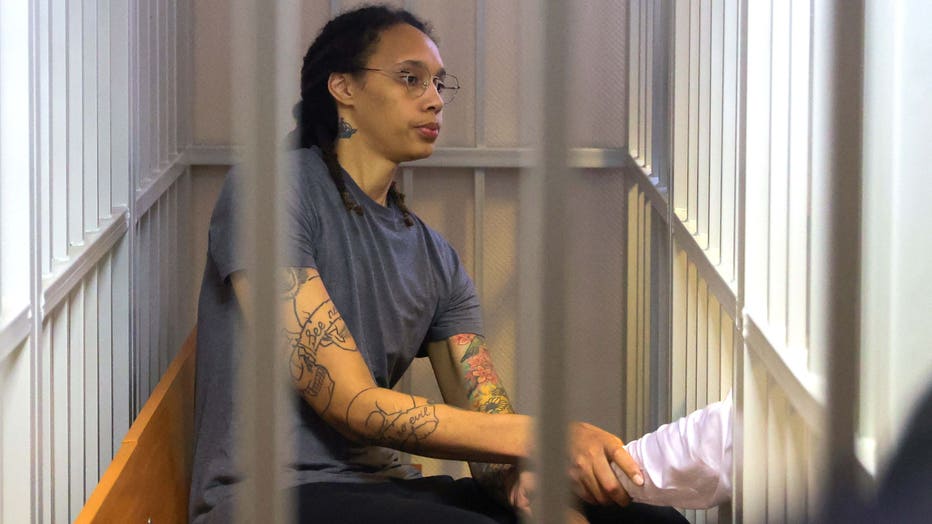 US Women's National Basketball Association (WNBA) basketball player Brittney Griner, who was detained at Moscow's Sheremetyevo airport and later charged with illegal possession of cannabis, sits inside a defendants' cage after the court's verdict dur (Photo by EVGENIA NOVOZHENINA/POOL/AFP via Getty Images)

In August, Griner was sentenced to nine years in prison. Her appeal, which the U.S. has called "another sham judicial proceeding," has been scheduled for Oct. 25.

Prior to the appeals court hearing, Boykov called for the sentence to be reduced.

"Perhaps the verdict will somehow be changed and, perhaps, the sentence will be reduced, because the decision taken by the first court is very different from judicial practice," he said. "Considering all the circumstances, taking into account my client’s personality traits and her admission of guilt, such a verdict should be absolutely impossible."

The United States maintains that Griner's sentence and trial were politically motivated.

MORE: What will it take to get Brittney Griner home?

Griner's arrest has been a talking point among other athletes, especially professional female basketball players.

It has become common for WNBA stars to go overseas to Russia to play for teams owned by oligarchs. The players' motivation for playing in Russia? Much higher salaries than what they typically earn in the U.S.

Breanna Stewart, Jonquel Jones and Courtney Vandersloot have all previously said they declined to travel to Russia this offseason.

To entice players to stay home, WNBA Commissioner Cathy Engelbert said top players could make up to $700,000 this year between base salary, marketing agreements and award bonuses.

U.S. authorities have said they are continuing to work to arrange for Griner's release and have previously designated her as "wrongfully detained."

Griner is an eight-time All-Star and a two-time Olympic gold medalist.