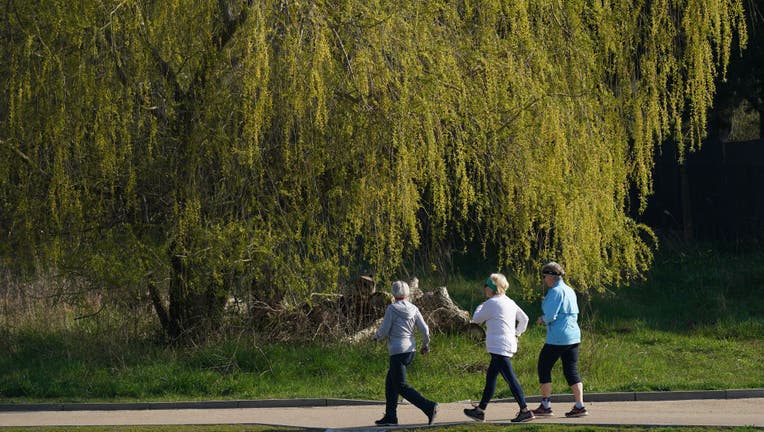 BERLIN, GERMANY - APRIL 20: Elderly women walk at a fast pace in a park during the third wave of the coronavirus pandemic on April 20, 2021 in Berlin, Germany. Outdoor exercise has for many people become vital during the ongoing pandemic lockdown for

LEICESTER, England - A new study has suggested a link between walking pace and a genetic marker of biological age.

The study was published Wednesday by the University of Leicester in Communications Biology.

Researchers studied the link between a person’s walking pace and leucocyte telomere length (LTL) — an indicator of biological age. Telomeres are "caps" at the end of chromosomes that protect the chromosomes from degrading. The more a cell divides, the shorter the telomeres. Shorter telomeres are an indication of older age.

For the study, researchers studied genetic, self-reported data from more than 400,000 United Kingdom middle-aged adults between March 2006 and July 2010.

Researchers found that steady/average and brisk walkers had significantly longer LTL compared to the slow walkers. They also found a number of health risks associated with slow walkers that prevented them from walking faster such as obesity.

"This suggests measures such as a habitually slower walking speed are a simple way of identifying people at greater risk of chronic disease or unhealthy ageing, and that activity intensity may play an important role in optimising interventions.," the study’s lead author Dr. Paddy Dempsey told Science Daily.

However, researchers stopped short of saying brisk walking causes better health, only saying they have established a link.

"Whilst we have previously shown that walking pace is a very strong predictor of health status, we have not been able to confirm that adopting a brisk walking pace actually causes better health," senior author Tom Yates told Science Daily. " In this study we used information contained in people's genetic profile to show that a faster walking pace is indeed likely to lead to a younger biological age as measured by telomeres."