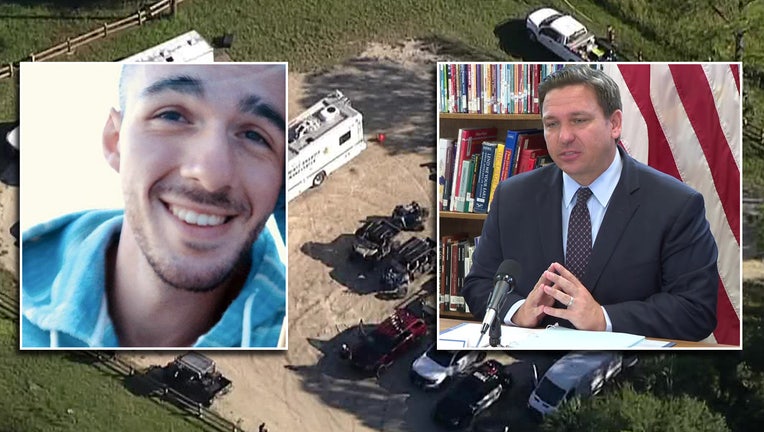 NORTH PORT, Fla. - Florida Gov. Ron DeSantis on Friday said he hopes fugitive Brian Laundrie "is apprehended and brought to justice" if officials and jurors eventually find him guilty of a crime.

DeSantis' comments came after a press conference in North Port, Florida — where Brian Laundrie lived with his parents and deceased fiancée, Gabby Petito — during which the governor announced a $1.69 million grant for the city to help with job creation.

"You know, my view would be, it's a little disappointing that we still don't have this guy's whereabouts," DeSantis said in response to a question about Laundrie from Fox News Miami correspondent Phil Keating.

"This is obviously somebody that would be a suspect when something like this happens," DeSantis, a father to two daughters, added. "Clearly there [were] things going on here with the family. So I hope that he's apprehended and brought to justice if, in fact, he was the one that is guilty of this, because it's a really sad thing — this is a very beautiful young girl with a lot of potential. And a lot of people really loved her a lot, and to see this happen really is heartbreaking."

Law enforcement on Friday continued to search for Laundrie at the Myakkahatchee Creek Environmental Park in North Port while also conducting "special response team training," according to the North Port Police Department. The park is adjacent to the T. Mabry Carlton Jr. Reserve, where law enforcement has been searching for Brian Laundrie for weeks.

Laundrie, 23, is a fugitive wanted on debit card fraud charges and a person of interest in Petito's killing, which a coroner on Tuesday ruled as homicide by strangulation. The pair were traveling cross country in a Ford Transit van before Petito's parents reported her missing Sept. 11.

Laundrie returned home to North Port Sept. 1 in the van without Petito. He has been named a person of interest in the case, and his whereabouts have been unknown for weeks. His parents reported him missing to North Port Police on Sept. 17.

On Sept. 23, the FBI issued an arrest warrant for Laundrie, accusing him of bank card fraud. Authorities alleged at the time that he used an unidentified person’s Capital One card and the personal identification number to charge or withdraw over $1,000 between Aug. 30 and Sept. 1, a period when Petito was missing.