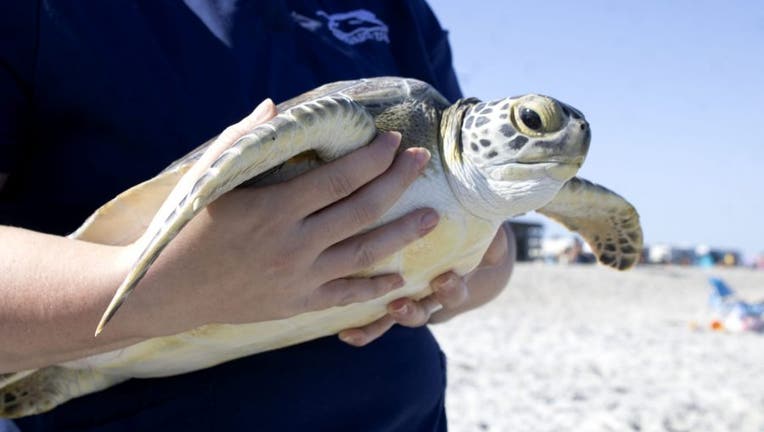 A green sea turtle that has been in the care of the Brevard Zoo for the past five months was returned to the sea this week.

The turtle, known as "Hiccup," arrived at the Healing Center in October 2021 after being found struggling in the water in Jetty Park.

Zoo officials say Hiccup had an unusual "twitch" where the turtle would flick its head in a way that looked like it had hiccups! Thus, he was lovingly given the name.

This twitch, however, made it impossible for Hiccup to get its head up and take a breath while swimming. The turtle was checked out by the animal care team and tested for toxins to try and figure out why it had this condition. The team says that while they never found out what caused the twitch, it eventually went away.

"We found that Hiccup had fractures to their plastron, or the flat part of their shell, and a break to their hyoid bone (which is in the neck). It’s possible that Hiccup’s twitch was related to the pain associated with these injuries. Hiccup was also treated for caryospora (a parasitic protozoan)," the zoo said.

Over the past five months, the animal care team worked to rehabilitate Hiccup, slowly reacclimating the turtle to swimming.

"They took a lot of time to adjust to swimming again and seemed to have a hard time controlling their buoyancy, as they would sink to the bottom like a rock," said Healing Center coordinator Jess Patterson. "They would then have a hard time swimming to the surface, spooking any time they touched the side of the pool. Eventually, they calmed down and were able to navigate their pool better."

Another challenge was getting Hiccup to eat. The turtle was unable to eat on its on, so a feeding tube was used for four months.

After overcoming obstacles, the zoo is proud to say that Hiccup is active, curious and back in its habitat. They released Hiccup this week at the same location where it was initially found, in Cape Canaveral.