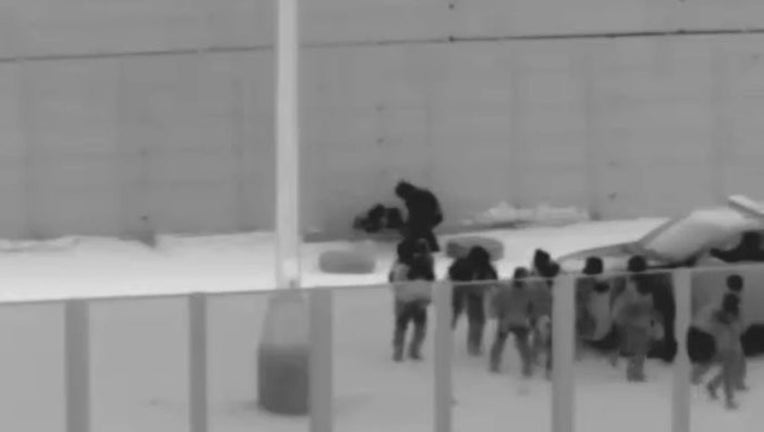 Arizona Border Patrol agents for several months have been overwhelmed by the arrival of large numbers of Central American migrants traveling in families. The latest arrests near Yuma come as a caravan of several thousand Central American migrants slowly makes its way north, prompting President Trump to decry their efforts to reach the U.S. border.

The Border Patrol’s Yuma Station reported that its agents apprehended 82 people from Guatemala and El Salvador traveling as families just before midnight Tuesday after an agency camera operator saw them scaling a wall east of the San Luis Port of Entry south of Yuma. They ranged in age from 2 to 48 years.

On Wednesday about four hours later, agents surprised 83 migrants crossing the border through a hole they dug underneath the same wall a short distance away. Those people from Guatemala and El Salvador ranged in age from 2 to 40. A Border Patrol camera captured images of some coming under the wall on the U.S. side.

“We don’t usually see them cross in large groups like this,” said Border Patrol Agent Jose J. Garibay III. “You’ll usually just see them in groups of 12 or 15 or just five, but we’re not used to seeing these large coordinated efforts.”

Garibay said that the old portion of the wall that the second group dug underneath lacks the improved concrete footer contained in prototypes for the new proposed wall.

While Mexican men traveling without relatives once made up the bulk of the migrants trying to cross illegally into the United States, Guatemalans and other Central Americans traveling in families or as unaccompanied minors are now the norm.

The numbers of apprehensions fluctuate every year due to smuggling trends, but the overall numbers of people immigrating illegally to the U.S. through the Yuma area and at the border in general are down dramatically compared with more than a decade ago. U.S. Border Patrol statistics show the agency apprehended 12,847 migrants in the Yuma Sector during the year that ended on Sept. 30, 2017, compared with 138,438 migrants in the 12-month period that ended on Sept. 30, 2005.

Border Patrol agents in both the Yuma and Tucson sector farther east since August have increasingly encountered big groups of Central Americans traveling as families being left by smugglers at the border. One group was as large as 275 people.

The situation became so overwhelming in October that U.S. Immigration and Customs Enforcement released hundreds of people to await court dates, saying it didn’t have the capacity to hold an “incredibly high volume” of migrant families showing up at the border.