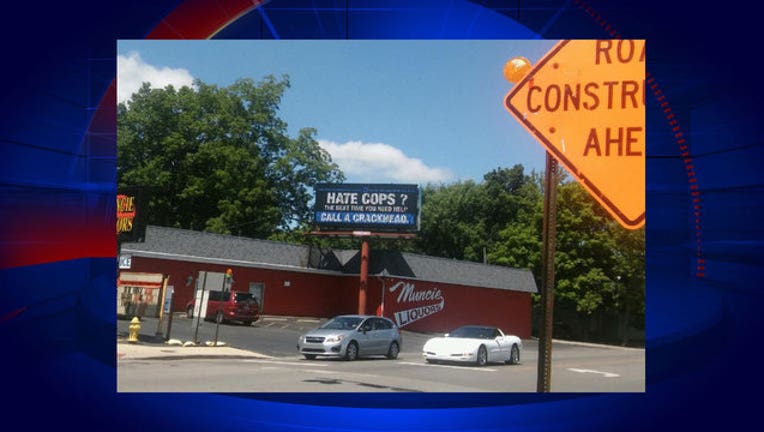 MUNCIE, Ind. (AP) - he owner of an Indiana billboard company says the message he posted on a digital sign in Muncie was meant to show support for police, but one local resident called it "covert racism."

Hometown Outdoor Advertising owner Gary Dragoo said the billboard message he posted on Saturday was meant to remind the public about the importance of police. The sign read: "HATE COPS? THE NEXT TIME YOU NEED HELP CALL A CRACKHEAD."

The sign was in response to "current events," Dragoo said. Police nationwide have been on high alert in the wake of recent killings of police officers in Dallas and Baton Rouge, Louisiana.

Dragoo said he decided to change the electronic message after learning that a liquor store that is adjacent to the parking lot where the sign is located was getting complaints. He changed the message to read: "LOVE RESPECT SUPPORT LAW ENFORCEMENT."

Megan Thomas of Muncie saw the sign while walking with her niece and was offended, calling it "covert racism." She questioned why Dragoo didn't say "meth head" on the billboard, saying crack is more commonly associated with blacks. She also pointed out there was a Black Lives Matter protest about a quarter-mile away the same day the sign was posted.

Dragoo said her interpretation "falls short," reiterating he was only trying to show support for law enforcement.