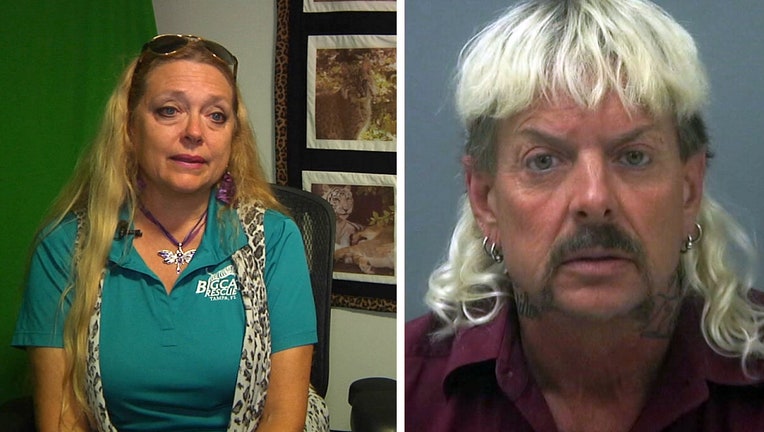 Carole Baskin, the CEO and founder of Big Cat Rescue, said she is disappointed with the Netflix documentary, 'Tiger King.'

The Oklahoma animal park was made famous by the Netflix series, which documented a failed murder-for-hire plot against Baskin by Joe Exotic, whose real name is Joseph Maldonado-Passage.

A lawsuit between Big Cat Rescue and Maldonado-Passage's mother, Shirley Schreibvogel, resulted in Monday's court order, which granted ownership of the zoo to Baskin, according to a copy of the ruling obtained by FOX 13.

Judge Scott Palk made the order after determining the property had been fraudulently transferred by Maldonado-Passage to his mother in an attempt to avoid paying Baskin a settlement in a trademark infringement lawsuit.

The judge ordered the GW Exotic Zoo, which is now run by Jeff Lowe, to vacate its property and hand over control to Big Cat Rescue.

The order gives Lowe 120 days to vacate the premises.

All animals must be taken off the property as well, while the title for the land must be transferred to Baskin. The order also grants ownership of several vehicles and portable buildings to Big Cat Rescue.

Maldonado-Passage was found guilty in 2019 of paying a hitman $3,000 to kill Baskin. The jury also convicted him of killing five tigers at the zoo. He was sentenced to 22 years in prison and is serving his time at the Grandy County Jail in Oklahoma.

"On June 1, 2020 the federal court in Oklahoma issued a judgment against an entity controlled by Jeff Lowe based in part on what the judge described as 'willfully failed to comply' with one previous court order and 'other failures to obey or respond to the Court’s orders in this case.' The ruling requires the entity to vacate the property within 120 days of service of the judgment, including removing the animals. In an Agreed Judgment in August 2019 Shirley Schreibvogel acknowledged her role in multiple fraudulent transfers some of which involved the entity controlled by Mr. Lowe. For that and the current rulings see BigCatRescue.org/agreed.

"Over a year ago Mr. Lowe announced plans to move the animals to a location in Thackerville, OK that he has been constructing and he claims will be a better facility. He recently stated that he had funds to complete the zoo and a contractor who could complete it in a few months.

"If the need arises to make other plans to place the animals in new homes, Big Cat Rescue and the animal welfare organizations that have previously successfully placed big cats from large facilities in new homes stand ready to assist."