The owner of a Cedar Key bed and breakfast says she'd been here 18 years without any significant storm damage, but with storm Elsa her luck ran out.

CEDAR KEY, Fla. - The owner of a Cedar Key bed and breakfast says she'd been here 18 years without any significant storm damage, but with storm Elsa her luck ran out.

A large tree on the property split and fell, cutting power and damaging two of the buildings. Owner Alice Phillips says the overnight caretaker at the B & B called her around 8am, Wednesday morning.

"She heard a crack, that's when the big limb came down and took the power lines and the main power source from the house off," Phillips said, "tore it off the building. Then another crack, and the other side of the cedar tree came down and landed on the honeymoon cottage bathroom."

Phillips said all it took was wind and rain.

"The cedars really sop up a lot of water. Then it doesn't take much wind, when it gets real wet, for them to split. That's what it did. Both those huge limbs split off the main trunk." 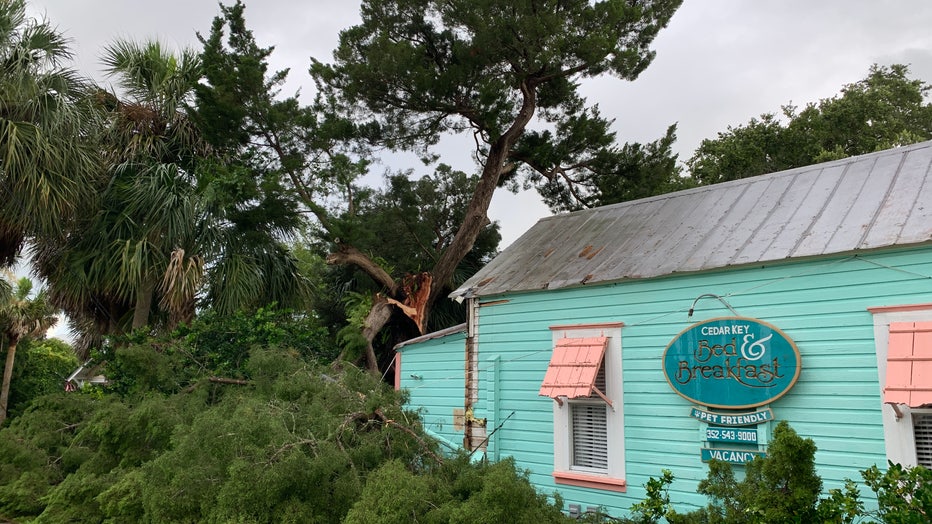 Cedar Key Police Chief Virgil Sandlin said the damage to the bed and breakfast is probably the worst damage Elsa caused on the island. He says as hurricanes go, on a scale on 1-10 he'd rate Elsa’s effects on the island as a "4."

"I guess her slowing down she caught us right at high tide. But she got on past, so it wasn't as bad as it could have been," he said.

Most people were just left clearing debris off their property. "We just got a lot of palm fronds and stuff we gotta pick up, yeah," said Linda Rogers.

Phillips figures it will cost around $5-6,000 to repair the damage. She says she'll be back open as soon as she can.