ADELAIDE, Australia - A baby quokka made its debut appearance at a zoo in Australia, peeking out of its mom's pouch for the first time on Friday.

"Yiray has definitely been eating for two, enjoying lots of snacks so keepers were very excited to see the little one appear for the first time," the zoo wrote.

In about a month, the tiny marsupial, which is a member of the kangaroo and wallaby family, will make its way completely out of its mom's pouch.

RELATED: Dogs can recognize their owners just by their voice, study finds

"Quokka joeys live in their mother’s pouch for around five months before making their way out to explore the world," keepers said. 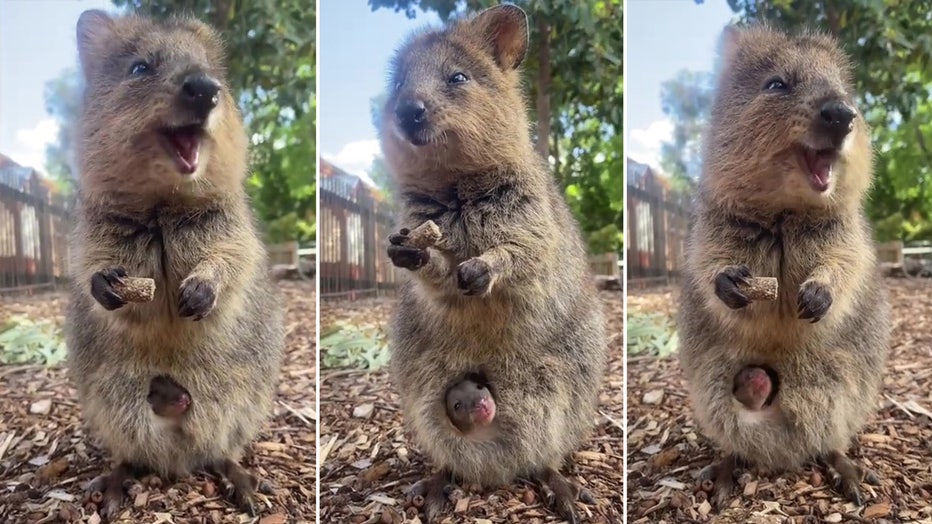 Yiray with her joey (Courtesy: Adelaide Zoo via Storyful)

Though quokkas were once "abundant across Australia," the small animals are now considered vulnerable to extinction, according to the IUCN Red List of Threatened Species.

Their numbers dramatically declined due to habitat loss and wild animal predation.

Today, quokkas are only found in Western Australia -- and almost entirely on tiny Rottnest Island, which got its name from quokkas.

Dutch explorer Willem de Vlamingh came upon the island off the coast of what is now Perth back in 1696, and named it "Rotte Nest" -- literally "rats' nest" -- because he mistook the quokkas for giant rats.

About 10,000 to 12,000 quokkas live on Rottnest Island, and are one of the main tourist attractions because of their adorable appearance.