"We did everything per policy per protocol per policy people say you tased an autistic man. That’s not true. We tased a felony suspect that wasn’t complying. We later found out he happened to be autistic," Chief Capri told FOX 35 News.

On Saturday afternoon, around 4:30, a woman called 911 saying a man had made strange hand gestures while looking at her then ran towards her, she went inside her home locked the door, and reported the man was outside trying to get in.

She described the man as over six feet tall and skinny wearing a grey T-shirt and black shorts.  According to the police report when officers arrived they found a man fitting that description in the area.

Police body camera video starts as two officers in the same car are getting out of their vehicle. There is no audio in the first 30 seconds of the video. A man matching the suspect description is walking towards the driver's side of the EPD officer's car.  Six seconds into the video, the officer draws his gun. Nine seconds in, he switches his gun for his Taser.  Fourteen seconds in, he deploys the Taser.  It strikes the man in the neck he stumbles forward but doesn’t fall.  Around 20 seconds into the video a second officer deploys his Taser striking the man and he falls to the ground face first.  30 seconds into the video the audio pops on and officers can be heard yelling commands, "Get on your stomach!"  The man is sitting on the ground completely silent, not making a sound, not following commands.  Just over a minute into the video, he gets zapped again.

Officers eventually get the man into handcuffs.   A little over four minutes into the video the people start running towards the officers yelling, "We know him! He’s autistic! He’s non-communicative."

It’s the man’s family. They say he has the mental capacity of a toddler.

Officers can be heard explaining that they tased the man, identified as 20-year-old Louis Grahai.  He was uncuffed and put in an ambulance.

According to a police report, once officers realized Louis didn’t have the mental capacity to commit a crime, they let him go without pressing charges.

Roberta Crew, Louis’s mother tells FOX 35 News that her son was taken to AdventHealth Waterman hospital then transferred to Orlando Regional Medical Center when doctors realized the extent of his injuries.

Crew says her son has a broken C-6 in his neck, a broken inner ear bone, a burst eardrum, and had to get 25 stitches in his chin.  He is now home from the hospital.  Since he is unable to communicate, Crew says she doesn’t know how much pain her son is in, but says he’s not acting like himself. 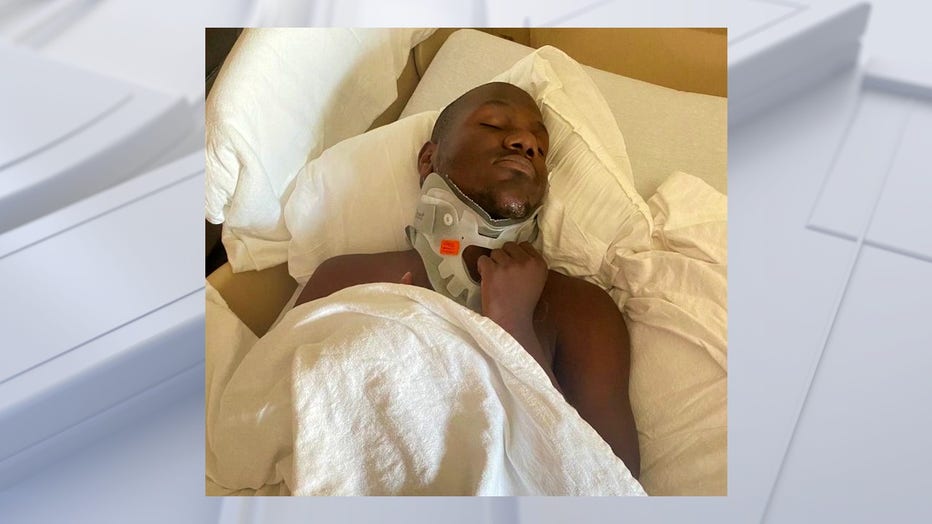 Crew says her son was out running around in her backyard like he does every day.  She went out to check on him and when she didn’t see him she thought he was hiding.  Crew says it’s not like Louis to wander off.  She says she is shocked at what happened and how fast it all happened.

"Broad daylight 4 o’clock in the afternoon you looking at him. He’s walking, starts jumping.  He’s aggressive? Shoot him? Come on man, he ain’t aggressive," Crew said.

Chief Capris says had known of Grahai's situation, they would have responded differently.

Chief Capris tells FOX 35 News that he has put Grahai's’ name, address, and description into the department's computer system so officers responding in the area aware that there is a non-communicative man suffering from severe Autism that lives in the area, in hopes of preventing something like this from happening again.