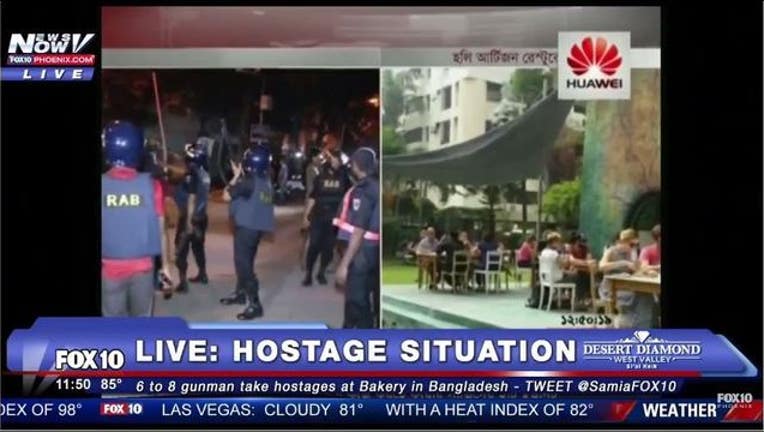 DHAKA, Bangladesh (AP) — As many as nine gunmen attacked a restaurant popular with foreigners in a diplomatic zone of the Bangladeshi capital on Friday night, taking dozens of hostages and exchanging gunfire with security forces, authorities and a witness said.

One police officer died of his wounds at a hospital, according to his nephew Mishu Hasan. Authorities had not yet reported the death.

A huge contingent of security forces cordoned off the area around the Holey Artisan Bakery in Dhaka's Gulshan area. Several other wounded police officers were hospitalized after security forces exchanged fire with the attackers inside the restaurant who also hurled bombs. A local resident Lutful Amin told the AP he heard several explosions, the last of which went off around 10:45 p.m.

The head of the elite anti-crime force, Rapid Action Battalion, told reporters Friday night that they were working to save the lives of the people trapped inside the restaurant. Authorities The hostages included an unknown number of foreigners.

"Some derailed youths have entered the restaurant and launched the attack," Benazir Ahmed said. "We have talked to some of the people who fled the restaurant after the attack. We want to resolve this peacefully. We are trying to talk to the attackers, we want to listen to them about what they want."

"Some of our people have been injured. Our first priority is to save the lives of the people trapped inside," Ahmed said. He would not say how many people were trapped inside

At least 35 people, including about 20 foreigners, were still trapped inside the restaurant, according to kitchen staffer, Sumon Reza, who was among more than 10 people who managed to run to the rooftop and escape.

He said the attackers chanted "Allahu Akbar" (God is Great) as they launched the attack around 9:20 p.m. Friday, initially opening fire with blanks.

In Washington, State Department spokesman John Kirby told reporters: "We are aware of reports of what appears to a hostage situation in the Gulshan neighborhood of Dhaka."

Kirby said that all American citizens that are under the authority of the diplomatic chief of mission in Dhaka were accounted for and were not involved in the incident, but the department is still checking on private American citizens who may have been in the area

He said it was too early to say who was involved in the assault and their motivation.

Bangladesh, a traditionally moderate Muslim-majority nation, has recently seen an upsurge in militant violence. Nearly two dozen atheist writers, publishers, members of religious minorities, social activists and foreign aid workers have been slain since 2013 by attackers wielding machetes. The frequency of attacks has increased in recent months. On Friday, a Hindu temple worker was hacked to death by at least three assailants in southwest Bangladesh.

The attacks have raised fears that religious extremists are gaining a foothold in the country, despite its traditions of secularism and tolerance.

Prime Minister Sheikh Hasina's government has cracked down on domestic radical Islamists. It has accused local terrorists and opposition political parties — especially the main opposition Bangladesh Nationalist Party and its Islamist ally Jamaat-e-Islami — of orchestrating the violence in order to destabilize the nation, which both parties deny.

The Islamic State group and al-Qaida affiliates have claimed responsibility for many of the attacks but the government denies that either group has a presence in the country.