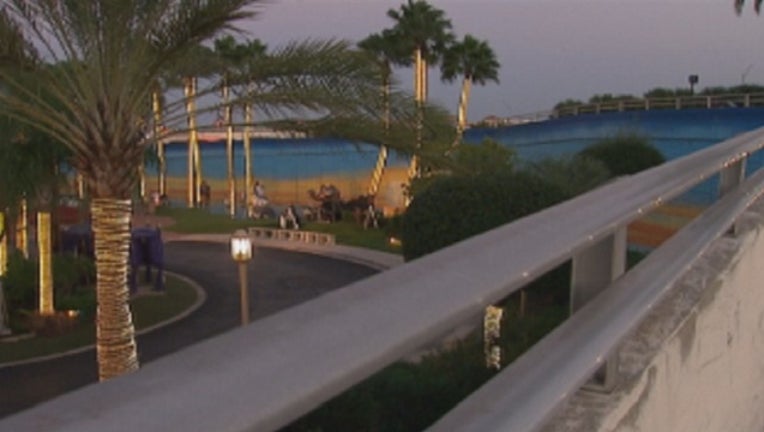 ORANGE COUNTY, Fla. (WOFL FOX 35) - It's a religious mural controversy in Orange County. The Holy Land Experience put up a mural next to its parking lot on a wall maintained by the Florida Department of Transportation. Now, an atheist group wants the mural removed.

It's difficult to see the mural from the street because it's located on a wall right next to the back of the Holy Land Experience parking lot.

The blue mural shows an angel holding a scroll. The mural is on the Conroy Road interchange wall near I-4, and that wall is owned by the state of Florida and maintained by the Florida Department of Transportation.

David Williamson is with the Central Florida Freethought Community. The group advocates for separation of church and state. It's affiliated with an atheist group called the Freedom from Religion Foundation.

Willliamson says, "The bottom line is we should not allow government property to be used to promote anyone's private agenda. In this case, it happens to be a religious organization."

The Freedom from Religion Foundation sent a letter to FDOT's Secretary Jim Boxold and to Orlando's Director of Public Works Rick Howard, urging them to remove the mural from government property.

Williamson says, "There is certainly cause to question whether this should be removed, and we think it should be."

An official with the City of Orlando tells Fox 35 News the location is not the city's property, so they are deferring to the state.

FDOT sent this statement. It says, "We are aware of the situation. We are examining what to do. No final determination has been made at this time."

Williamson believes the managers of the Holy Land Experience will remove the mural when they look at Florida's laws.
.
He says, "I think we can give them the opportunity to make it right. I think they should be given that chance."

The Holy Land Experience is owned by the Trinity Broadcasting Network.

Monday afternoon, a Trinity manager in Orlando referred Fox 35 News to their corporate attorney in California, who referred us to their media relations person in Washington, DC.

As of Monday night, that spokesman did not call Fox 35 News back.