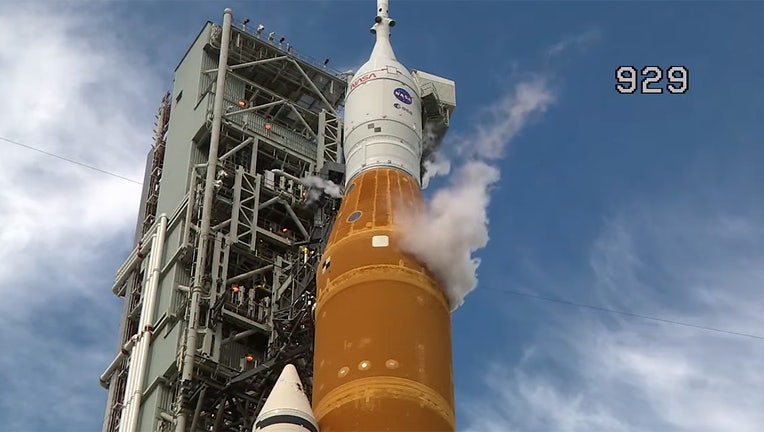 In this shot from NASA TV, the Artemis I fueling test is underway on Wednesday, Sept. 21.

CAPE CANAVERAL, Fla. - NASA officials are targeting November for its next attempt to launch the Artemis I rocket from Cape Canaveral, Florida to the moon.

Several attempts have been made since late August, but each attempt was scrubbed due to technical issues and most recently because of the severe weather Hurricane Ian brought to Central Florida.

Following Ian, teams at the Kennedy Space Center have since conducted initial inspections to assess any potential impacts from the powerful storm, and have not found any damage to Artemis flight hardware, and facilities are in good shape with only minor water intrusion identified in a few locations, the space agency announced Friday.

As teams continue to complete post-storm recovery operations, NASA said it will focus planning efforts on the next launch period that opens Nov. 12 and closes Nov. 27.

"Focusing efforts on the November launch period allows time for employees at Kennedy to address the needs of their families and homes after the storm and for teams to identify additional checkouts needed before returning to the pad for launch," the space agency said in a statement on its website.

The Artemis I is an uncrewed mission launching on the new and powerful moon rocket, Space Launch System or SLS. The mission is the first step in the next era of human exploration in space.