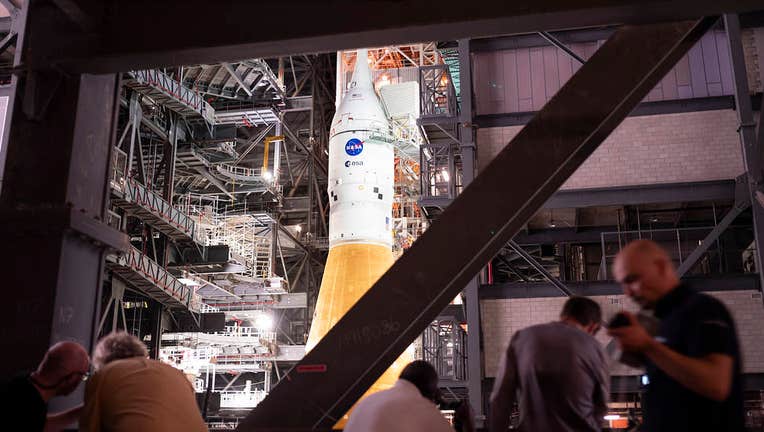 NASA’s Space Launch System (SLS) rocket with the Orion spacecraft aboard is seen atop a mobile launcher in High Bay 3 of the Vehicle Assembly Building. [Credit: (NASA/Joel Kowsky]

Ian was downgraded to a strong tropical storm as its path shifted east over the Florida Peninsula, near Cape Canaveral. NASA said only "minor water intrusion" was identified in some locations.

The moon rocket returned to the safety of its hangar Tuesday as Hurricane Ian approached Florida. Instead of trying to send it on its first test flight which was scheduled for Sept. 27, the launch team moved the 322-foot (98-meter) rocket off the pad. The four-mile (6.4-kilometer) trip took all night.

"Next, engineers will extend access platforms around the Space Launch System rocket and Orion spacecraft inside the Vehicle Assembly Building (VAB) to prepare for additional inspections and start preparation for the next launch attempt, including retesting the flight termination system," the space agency said on its Artemis I Mission blog. 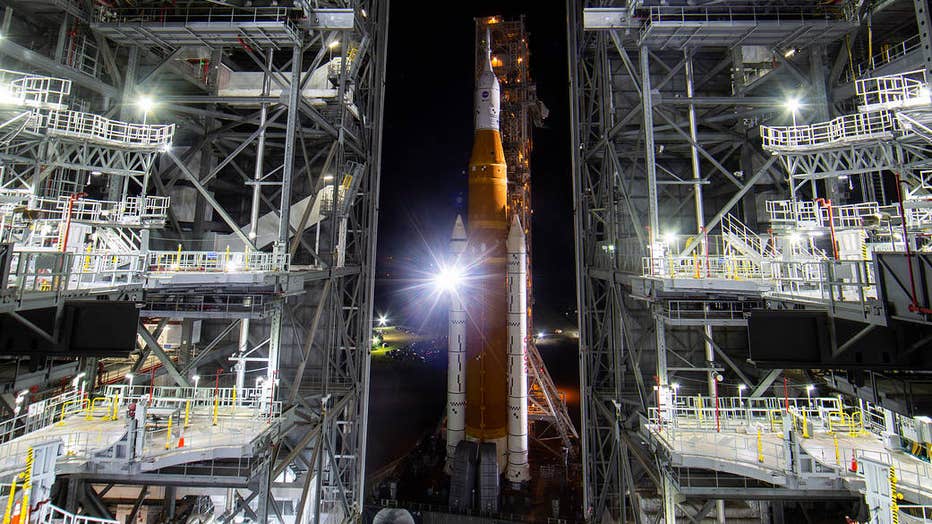 NASA’s Space Launch System (SLS) rocket with the Orion spacecraft aboard is seen atop a mobile launcher inside the Vehicle Assembly Building. [Credit: NASA/Joel Kowsky]

NASA official Jim Free said earlier this month that it would be difficult to upgrade the rocket and get it back to the pad for an October launch attempt. Putting in fresh batteries is particularly challenging, Free noted, making it doubtful a launch could be attempted before the mid-to-late October launch period closes. The next two-week window would open Nov. 12 and closes Nov. 27.

"Over the coming days, managers will assess the scope of work to perform while in the VAB and identify a specific date for the next launch attempt. Focusing efforts on the November launch period allows time for employees at Kennedy to address the needs of their families and homes after the storm and for teams to identify additional checkouts needed before returning to the pad for launch," NASA said.

The Space Launch System rocket should have blasted off a month ago but was delayed twice by fuel leaks and engine issues.

Once in space, the crew capsule atop the rocket will aim for lunar orbit with three test dummies, a crucial dress rehearsal before astronauts climb aboard in 2024. The last time a capsule flew to the moon was during NASA’s Apollo 17 lunar landing in 1972.