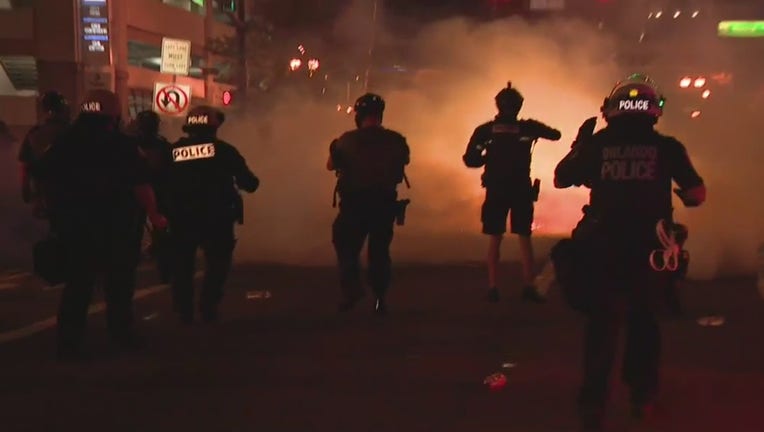 TALLAHASSEE, Fla. - An attorney for Gov. Ron DeSantis drew skepticism Thursday from a federal appeals court during arguments in a challenge to a controversial law that enhanced penalties and created new crimes in protests that turn violent.

DeSantis championed the measure after nationwide protests focused on racial justice following the death of George Floyd, a Black man who was killed by a Minneapolis police officer on May 25, 2020.

At a bill-signing ceremony last April after the Republican-controlled Legislature passed the law, DeSantis called it the "strongest anti-rioting, most pro-law enforcement piece of legislation in the country."

The Dream Defenders, the Florida State Conference of the NAACP and other organizations challenged the law in federal court, alleging it is unconstitutionally vague, has a "chilling" effect on First Amendment rights and gives police too much power.

Finding it to be "vague" and "overbroad," Chief U.S. District Judge Mark Walker in September issued a preliminary injunction blocking DeSantis and three sheriffs --- who were named as defendants in the case --- from enforcing the law.

During Thursday’s hearing before a three-judge panel, Judge Jill Pryor asked the state’s lawyer about "ambiguities" in the law, which specifies that it does not apply to people who are peacefully protesting.

"The plaintiffs say that when they look at the definition, it’s not clear, and I think they may be right, that if they’re peacefully protesting at a place where a violent disturbance breaks out, they may be able to be prosecuted or at least arrested under this statute," she said.

Jason Hilborn, a state deputy solicitor general who represents DeSantis, said the law "requires the accused to be active in a violent public disturbance."

But Judge Elizabeth Branch pressed him on the issue, saying "certain lines get blurry" when deciding who is committing wrongdoing.

"In that hypothetical, your honor, the only people who are engaging and actively engaged in the violent part of that crowd would be participating in a violent protest," Hilborn said.

The case focuses in large part on a section of the law that creates a new definition of "riot."

"A person commits a riot if he or she willfully participates in a violent public disturbance involving an assembly of three or more persons, acting with a common intent to assist each other in violent and disorderly conduct, resulting in: (a) Injury to another person; (b) Damage to property; or (c) Imminent danger of injury to another person or damage to property," the law says.

The law makes it a third-degree felony for anyone "found guilty of a riot, or inciting or encouraging a riot." People arrested for violations of the anti-rioting provision must be held without bail until making first appearances before judges.

Judge Ed Carnes repeatedly asked Hilborn to explain how the 2021 law differs from the common-law definition of riot, which is what law enforcement and prosecutors have relied upon since a 1975 Florida Supreme Court ruling in a case known as State vs. Beasley.

"I think our statute narrows the common-law definition by adding a willful requirement," Hilborn answered.

But Carnes pointed to the Beasley case, which established a riot to mean a "tumultuous disturbance of the peace by three or more persons, assembled and acting with a common intent."

"It seemed to me like Beasley covered that and said there had to be an intent," Carnes said.

Hilborn agreed that the Florida Supreme Court read an "intent requirement" into the statute.

"But here we have an express indication, which provides even more help to an ordinary person on the street," DeSantis’ lawyer argued.

"So if the Supreme Court of Florida says you have to have an intent, that means you have to have an intent, doesn’t it? So the statute changed nothing. Counsel, doesn’t the fact that you’re having a problem telling me what the statute does that the common-law definition that it amends didn’t do indicate to you that there’s a problem with your theory?" the judge asked.

"I don’t think so, your honor," Hilborn said.

Sonya Harrell, an attorney for the Jacksonville sheriff, took a stab at Carnes’ line of questioning.

"What we have now, your honor, is a belt and suspenders for the intent requirement," she said. "So while the original statute was enforceable and somewhat sufficient, the amendment builds on the common law. It does not broaden the class of people who may be prosecuted. It instead assists law enforcement and prosecutors with determining who is willfully participating in a violent public disturbance."

But James Tysse, who represents the plaintiffs, urged the judges to allow the preliminary injunction to remain in place.

Tysse said the new law has "absolutely chilled the exercise" of the plaintiffs’ First Amendment rights.

"So now, on its face, the amended definition now covers not only the violent rioters themselves … but anyone who, quote, participates in a larger assembly of which those rioters form a part," Tysse said. "In the context of a protest, to participate is to be at the protest. It might be carrying a sign. It might be marching. It might just be being there."