KYIV, Ukraine - The charred wreckage of what was once the world’s largest plane and destroyed in Russia’s war on Ukraine was captured in new video footage and images after Russian troops retreated from the area.

Remnants of the Antonov-225, nicknamed the "Mriya" ("The Dream"), were seen in a video filmed on Saturday by a correspondent with Radio Free Europe/Radio Liberty.

The footage, as well as other photos, showed parts of the plane completely destroyed. Video also showed other destroyed military vehicles, including armored personnel carriers and trucks.

It had been parked in a hangar undergoing repairs at Hostomel (or Gostomel) airport, located just northwest of Kyiv, and was destroyed early on in Russia’s invasion of the country, which began on Feb. 24.

HOSTOMEL, UKRAINE - APRIL 03: A view of the wreckage of Antonov An-225 Mriya cargo plane, the world's biggest aircraft, destroyed by Russian shelling as Russia's attack on Ukraine continues, at an airshed in Hostomel, Ukraine on April 03, 2022. The wreckage of the world's largest cargo plane Antonov An-225, which was severely damaged and rendered unusable due to Russian bombardments, was viewed by Anadolu Agency. (Photo by Metin Aktas/Anadolu Agency via Getty Images)

Antonov An-225 'destroyed' in Russia-Ukraine war

Satellite images released by Maxar Technologies on Feb. 27 showed heavy damage to the airport where the cargo plane was being stored. Ukraine’s official Twitter account later confirmed that the plane had been a casualty of the attacks.

"The biggest plane in the world ‘Mriya’ (The Dream) was destroyed by Russian occupants on an airfield near Kyiv," a tweet read. "We will rebuild the plane. We will fulfill our dream of a strong, free, and democratic Ukraine."

Previously, the An-225 had been used to move exceptionally large cargo with its 290-foot wingspan and was originally built to transport Soviet-era space shuttles, according to Space.com.

Two AN-225 planes were originally set to be built, but only one was completed before the fall of the Soviet Union in 1991. The completed AN-225 sat in storage for several years until it was restored to flight as a heavy-lift cargo plane, Space.com reported.

The aircraft was used last year to fly medical supplies in response to the COVID-19 pandemic. 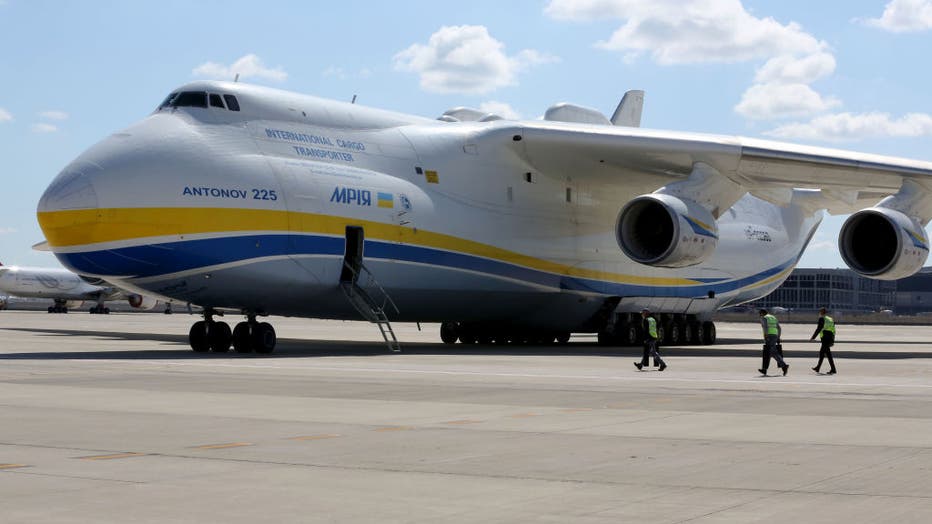 Over the weekend, Ukrainian troops moved cautiously to retake territory north of the country’s capital in the wake of the Russian redeployment. But in towns and cities surrounding Kyiv, signs of fierce fighting were everywhere — as well as growing evidence of what appeared to be deliberate killings of civilians.

On Sunday, Ukrainian officials said that scores of killed civilians have been found on the streets of Kyiv’ suburbs of Bucha, Irpin and Hostomel after the withdrawal of Russian troops.

They said that some victims were shot in the head and had their hands bound.

Some Western leaders called for further sanctions in response to the alleged atrocities, even as Moscow continued to press its offensive in the country's east.