Floridians will vote this year on raising the minimum wage. Workers say without an increase, they need to work multiple jobs. Employers say it will be a costly proposition.

"More and more Floridians are realizing that they can’t survive off the current minimum wage. Right now, more than 200,000 Floridians are earning just $8.56 an hour, including women and people of color who are over-represented within that group,” said State Representative Anna Eskamani. “Raising the minimum wage will put millions in the pockets of hard-working Floridians, as well as close the wage gap for women, Latino and Black workers.”

“Someone earning the minimum wage in the Orlando area would need to work 96 hours a week in order to afford a one-bedroom apartment. This culture of poverty in Central Florida is costing taxpayers big time,” State Representative Carlos Smith explained. “The Orlando International Airport is one of the largest economic engines in Central Florida. Its failure to produce jobs that pay living wages swells our welfare rolls, while the top 1% continues to live comfortably off the backs of working people.”

“I make $9.00 an hour with barely any tips at the Orlando International Airport. It’s impossible to survive on what I’m earning,” said Miguel Mejias, a wheelchair attendant. “If I was earning a living wage, I’d have a little extra to go out to eat at my neighborhood restaurant, buy a gift for my daughter at a local business, or just pay off my debts. Raising wages are good for workers and the local economy that we support.”

Under Amendment 2, Florida voters will decide whether to raise the minimum wage to 15 dollars by 2026. 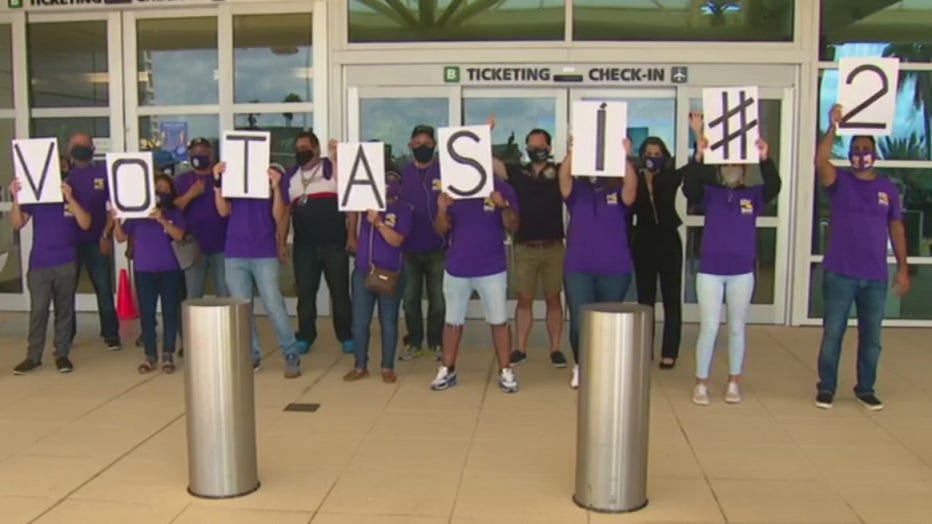 Florida is one of 25 states increasing the minimum wage for 2020.