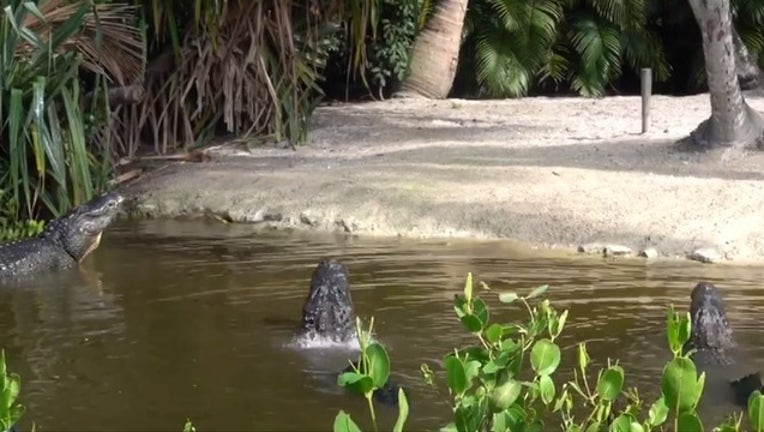 FOX NEWS - As the weather gets warmer, alligators are likely to come out in full force for mating season in the coastal South. Just this month, alligators have been seen knocking on people’s windows, disrupting golf tournaments and crossing busy streets.

Aside from roaming farther from the water in search for mates, alligators also bellow — a prehistoric sound that was caught on video at a Florida zoo last week.

In a video posted on Facebook from the Naples Zoo at Caribbean Gardens in Naples, Florida, three alligators can be seen bobbing in the water, making loud growling or roaring sounds.

A person nearby can be heard comparing the sound to dinosaurs.

“It sounds like something out of Jurassic Park,” the person is overheard saying.

According to the zoo’s caption on the video, alligators bellow all year, but they do it more often during mating season.

“Alligators also may bellow to communicate size to each other,” the zoo said. “While both males and females bellow, males can reach a lower frequency, which causes the water to ‘dance’ on their backs, like you can see here with the gator in the middle!”

One commenter wrote: “Good thing they are at the zoo and not in my yard!”

Another person said: “To me, that sound means, ‘I'm going to est (sic) you alive if you come near me!’”

Someone else joked about snoring, saying: “From what I'm told, this is me sleeping.”

According to the Florida Fish and Wildlife Conservation Commission (FWC), alligators begin courting in early April and mate in May or June.

Aside from roaming farther from their lagoons, warmer temperatures also revs up alligators’ metabolism, making them more active and aggressive as they hunt for prey and mate.

The FWC recommends not swimming during dusk or dawn — an alligator’s most active hours — keeping animals on a leash and away from water and keeping a safe distance if they come into contact with the large creature.