All Hollie Wilson can do is pray.

Her seven horses were covered in ice for more than a day while snowdrifts nearly three feet tall trapped them inside a barn on her South Heart, North Dakota, farm as a historic April blizzard pounded the Northern Plains.

"And that's what I was afraid of … getting hypothermia," said Wilson, who has six quarter horses on her ranch. "Hopefully all my horses pull through this and don't end up sick and colicking on me."

Izzy, her miniature pony, stands 32 inches tall, and trying to get through the drifts was impossible. 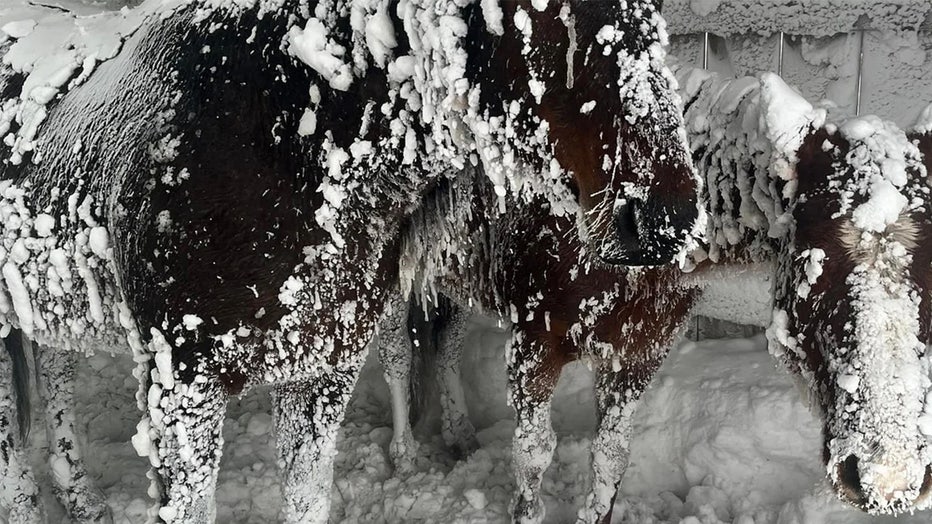 Hollie Wilson's seven horses are covered in ice and snow, trapped in a snowed-in barn on her South Heart farm as a historic April blizzard pounds North Dakota.  (Hollie Wilson via FOX Weather)

"My quarter horses can jump, but she jumps to get into the drift, and she just falls right in the middle because she can't get over it," Wilson said. "I think the other horses kind of know what's going on. They almost plow a pass for her. It's just unbelievable."

It's a scary situation for Wilson who has lived in North Dakota her whole life. In 1997, she experienced a blizzard when she was 11 years old. 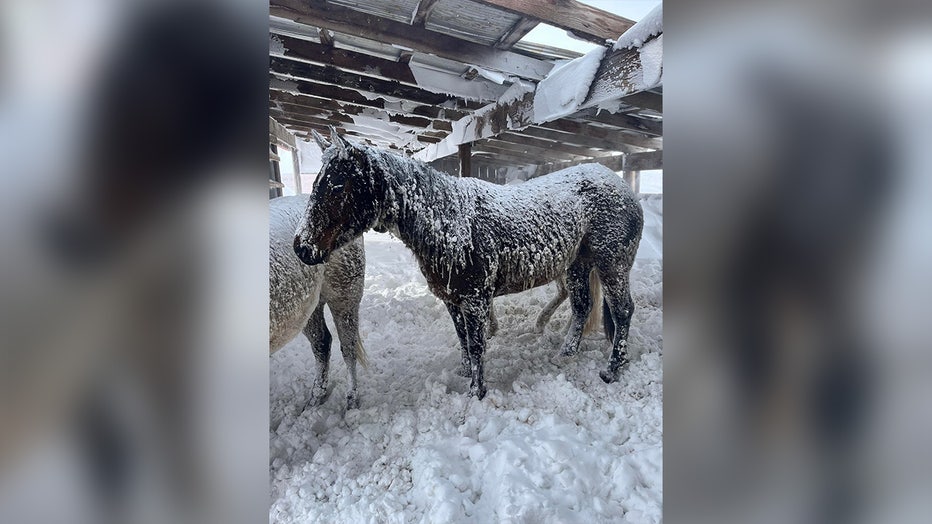 "It was snowing, I remember, but this is astronomical," she said. "I mean, we're having to dig things out. Our skid steer and tractors are getting stuck. It's just scary. It's nothing I could have ever imagined this storm to be."

Wilson has worked her whole life for her Rockin’ 33 Performance Horses ranch and breeding program but feels it's falling through her fingertips. 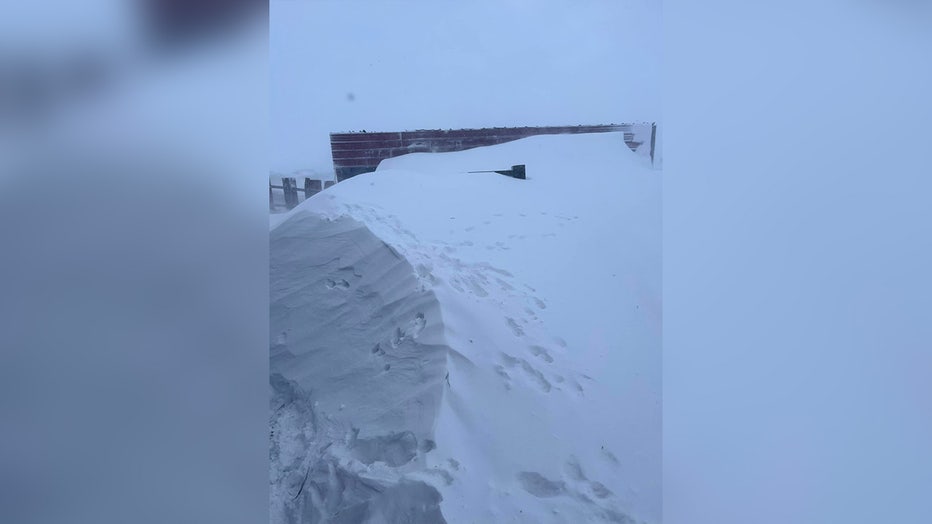 "I feel helpless," she said. "This is so hard to gather. It's really overwhelming." 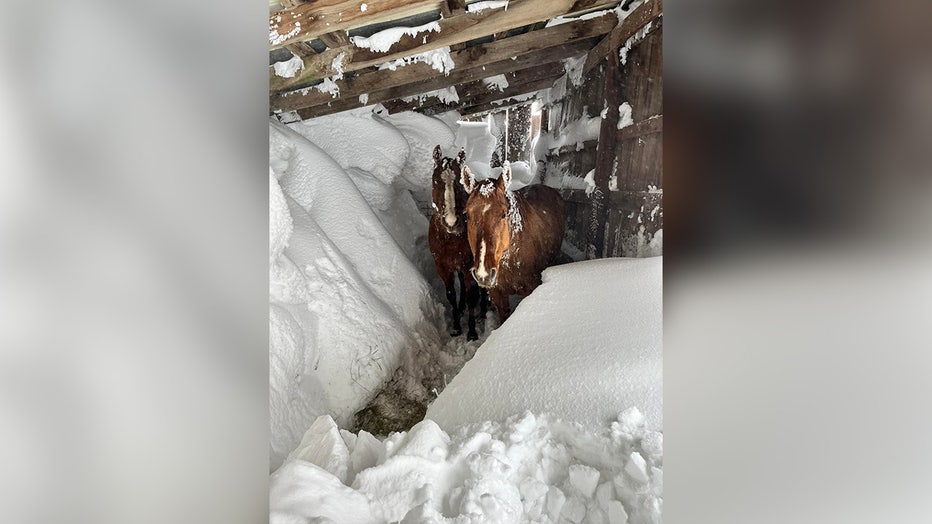 Hollie Wilson's seven horses are covered in ice and snow, trapped in a snowed-in barn on her South Heart farm as a historic April blizzard pounds North Dakota. (Hollie Wilson via FOX Weather)

As much as 47 inches of snow has piled up near Pony, Montana, since Monday, while up to 30 inches has been measured to the east in the towns of Minot and Glenburn in North Dakota. Snowdrifts up to 7 feet high have been reported in parts of North Dakota.

Thursday marked the third consecutive day of snow and high winds across parts of the Northern Plains. Winds gusted over 50 mph in Bismarck, North Dakota, resulting in near-whiteout conditions. 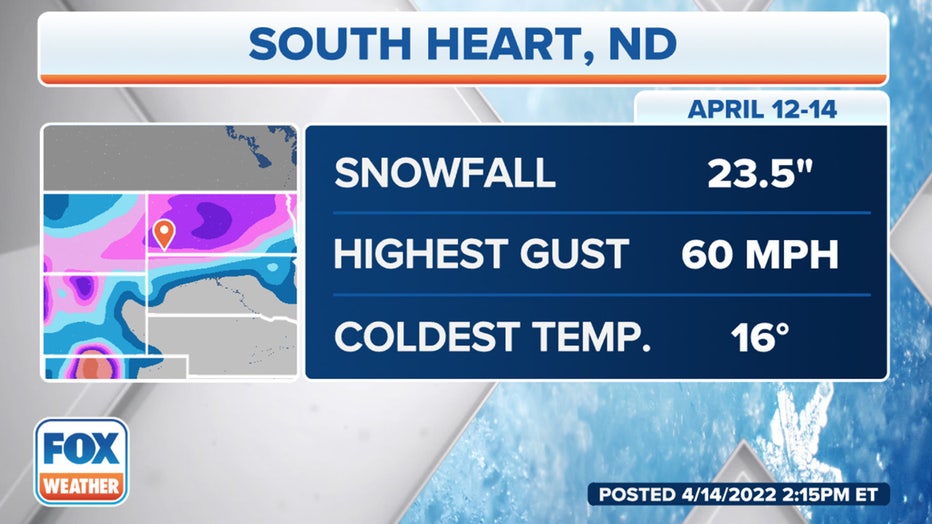 "All we can do is just pray to God that he wraps his arms around all these animals and not just ours," Wilson said. "There are hundreds of animals that have no protection, and, literally, all we can do is pray to God at this point."

The storm has the potential to break the North Dakota state record for the greatest three-day snowfall. The current record is held by Lisbon, which picked up 35 inches between Feb. 13-15 in 1915.

While the late-season winter storm comes to an end, it will still be a battle for ranchers like Wilson to dig themselves – and their animals – out for days to come.