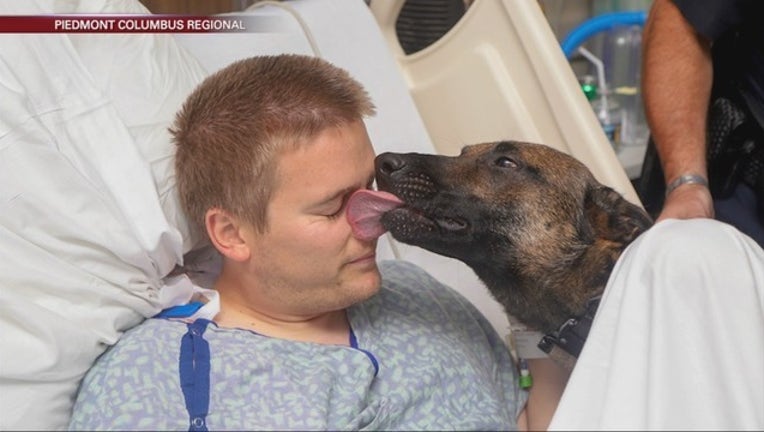 AUBURN, Ala. (AP) - An Alabama police officer who was seriously wounded in a shooting that killed another officer is improving, officials said Wednesday as they made plans to remember the fallen man.

Officer Webb Sistrunk has been moved into critical care at a hospital in Columbus, Georgia, according to a statement released by the Auburn Police Division. The change was an improvement because Sistrunk had been in intensive care.

Sistrunk and two other officers were shot at a mobile home park in Auburn on Sunday night. Officer William Buechner was killed, and another officer suffered a less severe wound.

Grady Wayne Wilkes, 29, is jailed on charges including capital murder and attempted murder in the shootings. Wilkes, who leads an infantry combat team with the Alabama National Guard, is being held without bail.

The statement relayed by police from Piedmont Columbus Hospital said Sistrunk was shot in the right shoulder. He will continue to undergo a number of medical procedures, it said.

Sistrunk is a canine officer, and he received a visit in the hospital from his dog partner, Leon. The animal was at the scene of the shooting, but wasn't injured.

"It's really good. He's my best friend," Sistrunk said in a video released by the hospital.

Meanwhile, the city of Auburn said Buechner's funeral would be held Friday afternoon at the Auburn Arena.

Court documents show officers were called to a mobile home park Sunday night by a woman who identified Wilkes as her live-in boyfriend and the father of her child. Meeting with officers away from their home, she said the man had threatened to kill her, according to the complaint.

The shooting began after police went to the couple's trailer.

"Officers knocked on the door and Wilkes answered the door wearing body armor and was armed with a rifle. After Wilkes opened the door he immediately began firing at the officers," the document said.