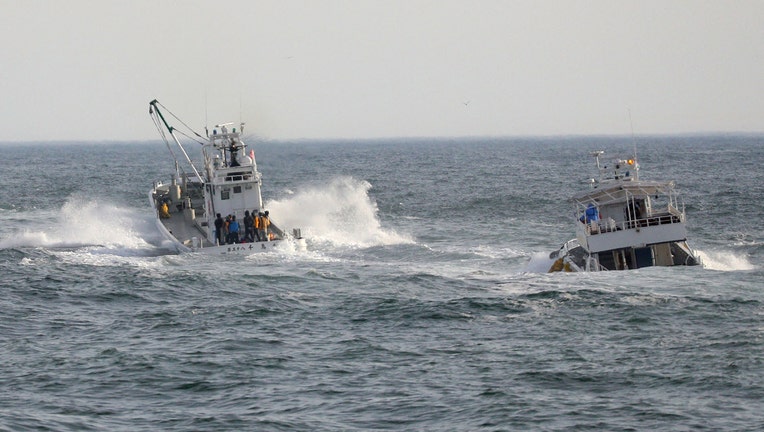 Fishing boats conduct a search operation for missing people aboard the "Kazu 1" sightseeing boat, that went missing a day earlier, in the Sea of Okhotsk near Shari, Okhotsk Subprefecture of Hokkaido on April 24, 2022. (Photo by Jiji Press / AFP via G

TOKYO (AP) - Rescuers said that 10 people who were retrieved Sunday from the frigid sea and the rocky coast of a northern Japanese national park had died, a day after a tour boat with 26 aboard apparently sank in rough waters, triggering questions why it was allowed to sail.

The search for the others is still ongoing after the boat sent a distress call on Saturday afternoon saying it was sinking. The location, near the Kashuni Waterfall, is known as a difficult place to maneuver boats because of its rocky coastline and strong tide.

There were two crew and 24 passengers, including two children, on the the 19-ton Kazu 1 when it ran into troubles while traveling off the western coast of the Shiretoko Peninsula. The coast guard said the 10 victims — seven men and three women — were adults.

The Transport Ministry launched an investigation into the boat’s operator, which had two accidents last year. The ministry said it was looking into safety standards and the decision to conduct the tour despite rough weather on Saturday.

The operator, Shiretoko Pleasure Cruise, had been instructed to take steps to improve its safety following earlier accidents in which it ran aground in June without causing injuries, and another in May, when three passengers suffered minor injuries when the boat collided with an object.

"We will thoroughly investigate what caused this situation and what kind of safety oversight was involved to allow the tour in order to prevent another accident," Transport Minister Tetsuo Saito, who visited the area Sunday, told reporters. 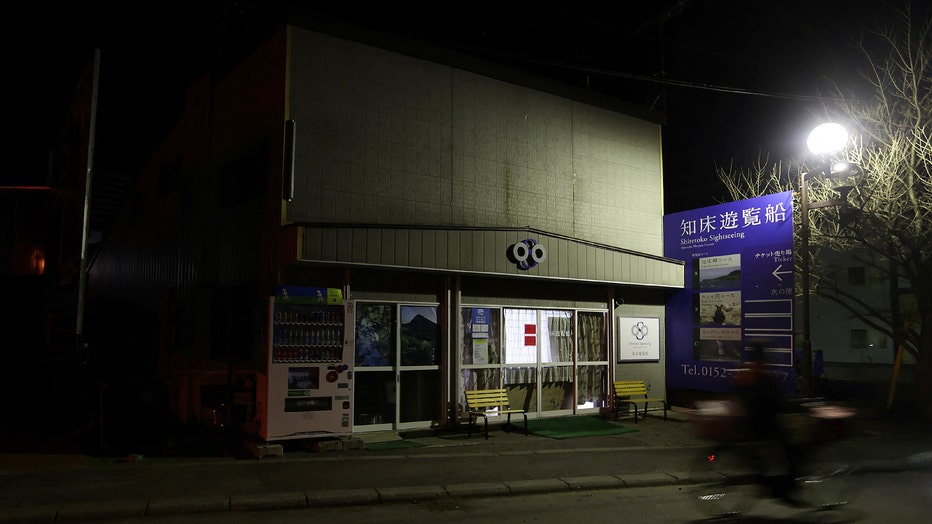 A general view shows the building of Shiretoko Sightseeing, a tour company building which a tour boat with 26 people onboard is missing, in Shari, Hokkaido on April 23, 2022. (Photo by Jiji Press / AFP via Getty Images)

Following an intensive search involving six patrol boats, several aircraft and divers that went through the night, rescuers on early Sunday found four people near the tip of Shiretoko Peninsula and later six more in the same area, about 14 kilometers (8.7 miles) north from where the boat sent a distress call. Some of them were plucked from the sea, while others were washed onto the rocky coast.

An orange-colored, square-shaped lifesaving float with the boat’s name on it was also found near the rocks, the coast guard said.

Footage on public broadcaster NHK showed one of the victims arriving on a helicopter and being transferred to an ambulance on a stretcher. Rescuers held up blue plastic shields to protect the victim's privacy.

The sightseeing vessel made an emergency call early Saturday afternoon, saying its bow had flooded and that it was beginning to sink and tilt, the coast guard said. Contact with the boat had since been lost. The coast guard said the operator told them that everyone on the boat was wearing a life vest, but some of the victims found were without them.

Average April sea temperatures in Shiretoko National Park are just above freezing, which experts say would cause hypothermia.

"It’s a very severe condition especially when they are wet," Jun Abe, vice chairman of the Society of Water Rescue and Survival Research, told TBS TV.

Yoshihiko Yamada, a Tokai University marine science professor, said the boat was likely to have run aground after it was tossed around in high waves and damaged. A boat of that size usually does not carry a life boat, he said.

Prime Minister Fumio Kishida cut short his attendance at a two-day summit in Kumamoto in southern Japan and returned to Tokyo. He told reporters early Sunday that he instructed officials "to do everything they can for the rescue."

The cause of the accident is under investigation, but officials and experts suspect a safety negligence.

High waves and strong winds were forecast when the boat left and Japanese media reports said fishing boats had returned to port before noon Saturday because of the bad weather.

A tour boat crew belonging to another operator told NHK that he warned the Kazu 1 crew of rough seas and told them not to go. He also said the same boat ran aground last year and suffered a crack on its bow.

Saturday’s tour was reportedly the first by the operator this season, and the accident just before Japan’s Golden Week holidays starting late April could dampen local tourism, which slumped during the pandemic. Japan is still largely closed to foreign visitors.

Hokkaido Gov. Naomichi Suzuki told reporters Sunday that he planned to request safety checks by tour operators in the prefecture ahead of the holidays.

According to the operator’s website, the tour takes around three hours and offers scenic views of the western coast of the peninsula and a chance to see whales, dolphins and brown bears. The national park is listed as a UNESCO World Heritage site and is famous as the southernmost region to see drifting sea ice.