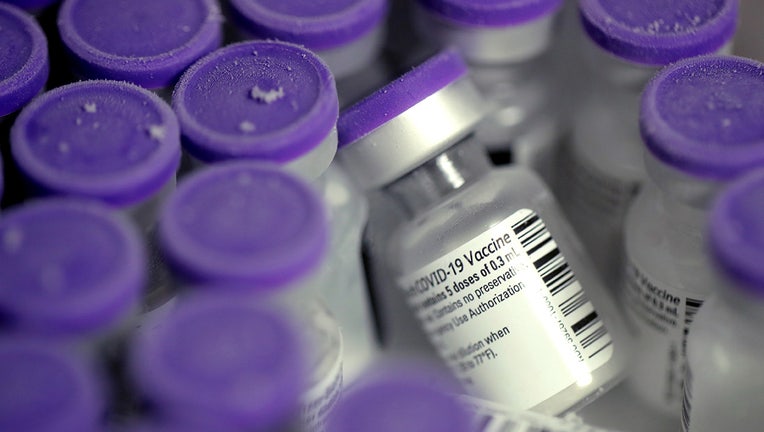 COVID-19 vaccine is stored at -80 degrees celsius in the pharmacy at Roseland Community Hospital on December 18, 2020 in Chicago, Illinois. (Photo by Scott Olson/Getty Images)

WASHINGTON - Twenty-one people have been charged in the past nine days as part of a nationwide enforcement push to root out those who exploit the pandemic through health care fraud schemes, the Justice Department announced Wednesday.

The cases resulted in about $150 million in alleged false billings and theft from federal pandemic assistance programs. The DOJ seized over $8 million in cash and other fraud proceeds.

Some defendants are accused of offering COVID-19 testing to get people to provide their personal identifying information and a saliva or blood sample. That information and the samples were then allegedly used to submit fraudulent claims to Medicare for unnecessary, far more expensive tests or services.

In Colorado, federal agents went through a man's trash to uncover an alleged scheme to produce and sell fake vaccination record cards. In Maryland and New York, owners of medical clinics are accused of using information from people who sought COVID testing at drive-thru sites to submit fraudulent claims for lengthy office visits that never occurred.

Eighteen former NBA players have been criminally indicted as part of an alleged scheme to defraud the NBA's health and wellness plan for their players. Players indicted include Glen "Big Baby" Davis, Sebastian Telfair, Darius Miles and Anthony Allen, among others. Federal prosecutors said the defendants submitted false claims to get reimbursed for medical and dental expenses that never actually took place.

"Today’s enforcement action sends a very clear message that we will stop at nothing to root out COVID-19 related health care fraud, wherever it may be found," said Assistant Attorney General Kenneth Polite. "The Department of Justice is committed to protecting the American people and the critical health care benefits programs that assist them during this national emergency. And most importantly, we will hold those who exploit those programs accountable to the fullest extent of the law."

Imran Shams and Lourdes Navarro, both 63, of Glendale, California, were indicted in an alleged scheme to defraud Medicare. They're accused of owning a laboratory that allegedly submitted nearly $144 million in false and fraudulent claims for COVID and respiratory pathogen tests. The tests were ineligible for reimbursement and procured through kickbacks and bribes, and Shams and Navarro concealed their roles in the lab because of prior health care fraud convictions, according to the indictment.

Navarro's attorney, Mark Werksman, said Wednesday his client denies the charges and looks forward to her day in court to show she did nothing illegal in connection with her lab work. Werksman said he may make a special appearance in court for Shams, who doesn't have a lawyer yet.

Other defendants are accused of exploiting telehealth policies put into place during the pandemic, misappropriating money intended for frontline medical providers and manufacturing and distributing fake vaccination record cards.

The DOJ led a similar nationwide enforcement push nearly a year ago that involved 14 defendants and a total of roughly $143 million in false billings. Numerous federal and local law enforcement agencies participated in both enforcement actions.

The Justice Department named a chief prosecutor for pandemic fraud last month, Kevin Chambers, following through on President Joe Biden’s State of the Union promise to go after criminals who stole billions in relief money.