Video shows two skydivers made a hard landing in Titusville.

TITUSVILLE, Fla. - Two skydivers are recovering after a terrible mishap with their parachutes that produced a hard landing in Brevard County on Wednesday.

The two ended up in front yard of a Titusville residence.  Tree limbs were everywhere, and the witness account of the fall from the sky is chilling.

"Oh my god, they’re going down, they both are," onlookers are heard saying btween gasps in the video.

Christina Renfro was at a nearby dog park when she looked up and saw the pair of skydivers spiraling out of control.  She could see something was wrong with the chutes, as both were open, but not slowing the descent.  She recorded 38 seconds of footage on her cell phone.

"They just continued to spin all the way down," Renfro said.

The tandem jumpers landed in a neighborhood not far from ther airport, a property at the intersection of Tennessee Street and Georgia Ave. 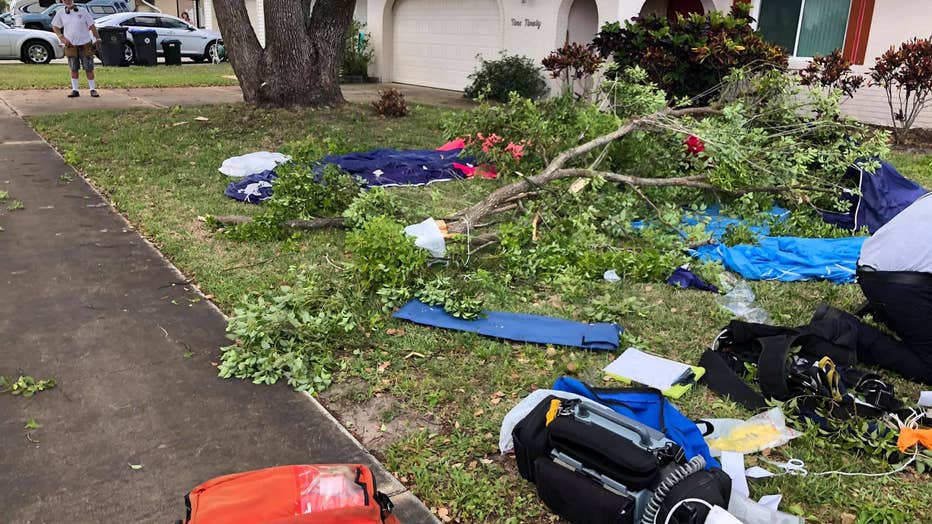 The Titusville Fire Department took a series of photographs as choppers arrived on the scene to airlift the two men to area hospitals. Police say both were seriously hurt, but the injuries are non-life threatening.

Witnesses thought they were about to see an utter tragedy.

"Pray, because there’s nothing you can do as you are watching them, it is what it is, you just pray for them and their families," Renfro described the helpless feeling as she watched.

For Renfro, this isnt the first time she has seen a skydiving accident. The nearby Dunn Airfield is popular with skydivers.

"The only relief, maybe, we had, was that their parachutes were open, they weren’t falling at a really, really fast pace but they were falling pretty quickly." Renfro said.

"We were just kind of like, fingers crossed, and hoping that they would’ve made it through, from what I gather they are critical but stable." Renfro said.

Authorities say these tandem jumpers are incredibly lucky they survived.