Biden visited the Walter Reed National Military Medical Center to visit patients, a week after an ISIS-K suicide bomber killed and injured dozens of US troops outside Kabul’s airport during the chaotic final days of the US withdrawal from Afghanistan.

The U.S. Department of State announced on Monday more than 124,000 Afghans and 6,000 U.S. citizens were successfully evacuated out of Afghanistan.

"The United States mobilized an unprecedented, global effort through our diplomatic channels to evacuate U.S. citizens, personnel from partner nations, and at-risk Afghans from Kabul," according to a State Department news release.

According to the State Department, a global network consisting of two dozen countries that spanned over four continents gave officials the ability to transport 65,000 people on a rolling basis, "including up to 2,000 spaces to accommodate persons that need longer-term processing," the news release stated.

Additionally, on Monday, the U.S. confirmed for the first time that it helped a U.S. citizen and family members escape Afghanistan through an overland route to a neighboring country.

A U.S. official said that the citizen and the citizen’s children "successfully departed Afghanistan using an overland route" and were met by U.S. Embassy staff at the border. The official would not speak in detail of the evacuation or to the country in which they arrived, citing security reasons and the need to preserve the viability of the route for possible future efforts. 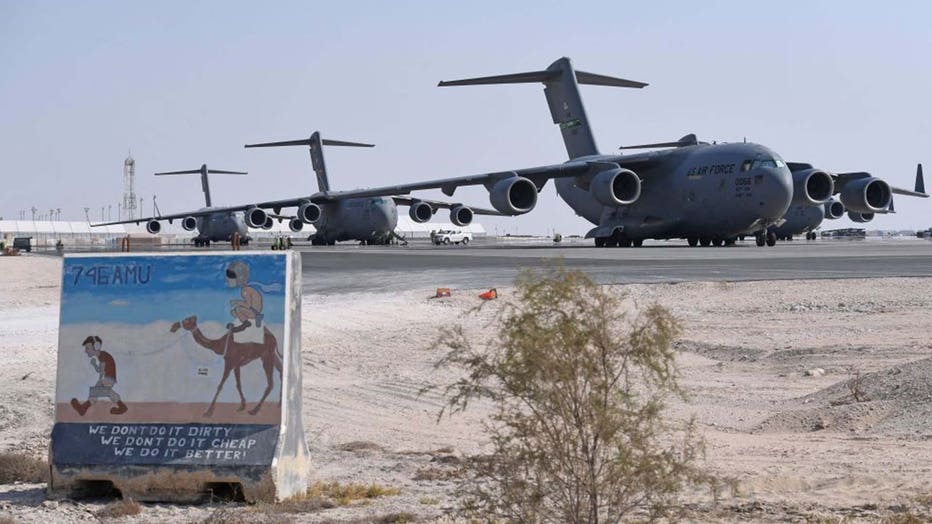 FILE - A general view shows US Air Force C-17 Globemaster aircrafts at al-Udeid Air Base which is housing Afghan refugees in the Qatari capital Doha on Sept. 7, 2021.

The evacuation is the first overland extraction the U.S. government has confirmed since it ended its air evacuation effort last week with the final withdrawal of American forces from Afghanistan.

The Biden administration this weekend said that "around 100" Americans remain in Afghanistan following the most recent evacuation of U.S. citizens and troops.

White House chief of staff Ron Klain told CNN that the administration is "in touch with all of them who we have identified on a regular basis."

Klain added that the administration is "hopeful that, in the coming days, Qataris will be able to resume air service out of Kabul."

"And if they do, we're obviously going to look to see if Americans can be part of those flights," Klain said. "We are going to find ways to get them – the ones that want to leave – to get them out of Afghanistan."

Administration officials said that many of those who remain in Afghanistan have family members in the region and "want to stay."

"But the ones that want to leave, we're going to get them out, as the president said," Klain said, maintaining that the troop withdrawal on Aug. 31 was simply a transition "from a military mission to a diplomatic mission to get the remaining Americans and the Afghan or Afghan allies, the so-called SIVs, out of the country."

He added: "And we continue to work on that."

Meanwhile, the State Department said that the U.S. is working "quickly and with precision" to ensure U.S. citizens and "at-risk Afghan civilians" are able to reach their ultimate destinations "safely and efficiently."

The State Department added that "dedicated intelligence, law enforcement, and counterterrorism professionals from the Department of Homeland Security, the Department of Defense, the Federal Bureau of Investigation, the National Counterterrorism Center, and additional Intelligence Community partners, are working around the clock to expedite the processing and vetting of Afghans before they are allowed into the United States. This includes reviews of both biographic and biometric data."

The State Department noted that nearly 40,000 people have departed overseas processing sites and have arrived in the U.S.