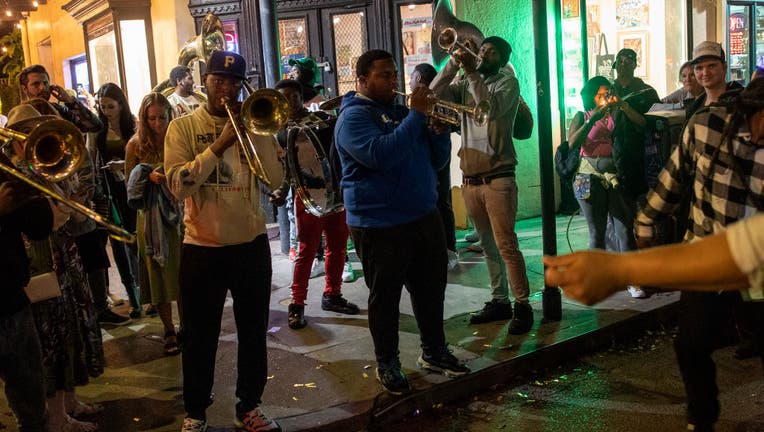 A traditional brass jazz band plays the local party music on a street corner on March 17, 2022 in the Marigny neighborhood of New Orleans, Louisiana.

NEW ORLEANS (AP) - The school board in the city where jazz took root is preparing to undo a little-known 1922 rule that bans jazz music and dancing in public schools.

Officials tell The Times-Picayune/The New Orleans Advocate that the policy has racist origins, as its creators sought at the time to distance New Orleans schoolchildren from the African Americans who created the genre. The rule has been ignored for decades. Jazz is taught in some schools and marching bands accompanied by dance teams are a fixture of Carnival season parades.

"In this instance and in this instance only we’re glad that the policy was ignored by our students, by our schools," board member Katherine Baudouin said. "Our schools played a major role in the development of jazz."

The board discussed the policy at a committee meeting Tuesday and planned to vote Thursday on reversing it.

The policy came to the board’s attention after Ken Ducote, executive director of the Greater New Orleans Collaborative of Charter Schools, read a book, "Chord Changes on the Chalkboard: How Public School Teachers Shaped Jazz and the Music of New Orleans," by Al Kennedy. Kennedy had found out about the policy while doing research.

"It’s like if Colorado passed a rule banning students from looking at the Rocky Mountains," Ducote said.

Reports from 1922 quote a then-school board member identified as Mrs. Adolph Baumgartner as one of the early opponents of the genre.

Kennedy said the ban was likely the school board "reacting to the fears of the day."

"Think of it as an early version of the book ban," he said. "It seems like they were more afraid of it being a bad influence than anything else."

Current board member Carlos Zervigon introduced the motion to reverse the ban at Tuesday’s meeting.

School Board President Olin Parker said the policy was "rooted in racism" and noted that the ban didn’t prevent "the tremendous contributions of our students and especially of our band directors whose legacy continues from 1922 on now through the Carnival season."

Ducote said the school board’s current practices require considerable public input before new policies are adopted. That prevents board members from passing new policies on a whim, as was done in 1922.