Watch as McTerrier was unmasked on the premiere episode of 'The Masked Singer' season 7 on March 9, 2022.

LOS ANGELES - "The Masked Singer" season 7 got off to a howlin’ start on Wednesday evening during the premiere episode, when McTerrier got so into their performance — the costume’s head accidentally came completely off.

Earlier in the episode, McTerrier raised the "woof" with a rendition of "Working For The Weekend" by Loverboy for the panelists. But it was at the end of the performance that the judges will never fur-get. 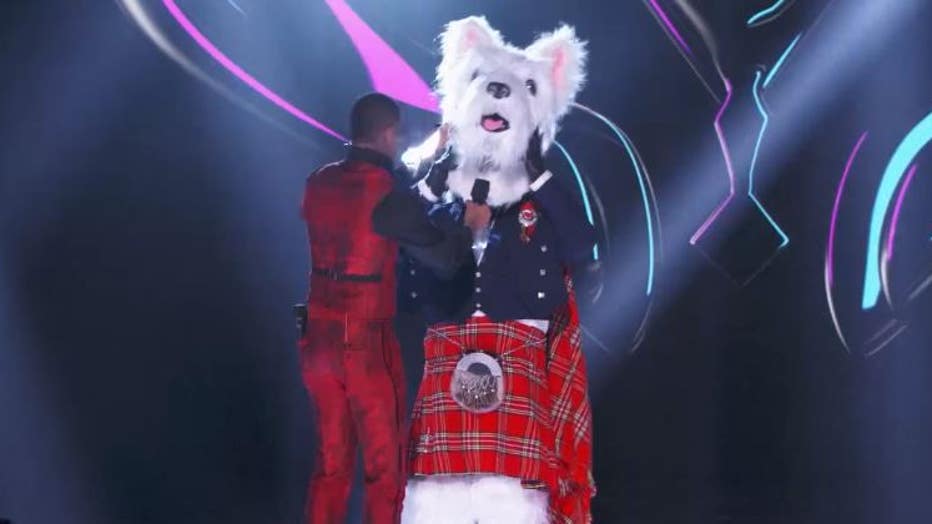 McTerrier appeared to stumble on the stage when their costume head took a tumble. They managed to turn around and cover their face as the panelists also turned around, concealing their identity until the dog was ultimately unmasked.

Later, McTerrier was revealed to be Duff Goldman, Charm City Cakes shop founder and Food Network star. Goldman, who did a drum solo during his performance, said in a post-reveal interview that he started decorating cakes as a way to supplement his dream of becoming a full-time musician.

Spoiler alert: McTerrier was unmasked as Food Network star Duff Goldman on the season 7 premiere episode of "The Masked Singer" and shared his experience on the show.

The first episode of the season also introduced fans to Firefly, Ram, Cyclops and Thingamabob. Firefly performed "Ain't Nobody" by Chaka Khan, Thingamabob sang "Wanted Dead or Alive" by Bon Jovi, Cyclops performed "My Sacrifice" by Creed, and Ram belted "I Want You to Want Me" by Cheap Trick.

Season 1, episode 1 — "Season Premiere: Mask On Face Off": Here’s where the madness begins, but as with any truly great episode of this madcap series, it’s one single performance that stands out. In the U.S. series premiere, theperformance also happened to be the first performance. Peacock’s rendition of "The Greatest Show" from the Hugh Jackman movie musical "The Greatest Showman" was, appropriately enough, a show-stopper, and it set the bar high.