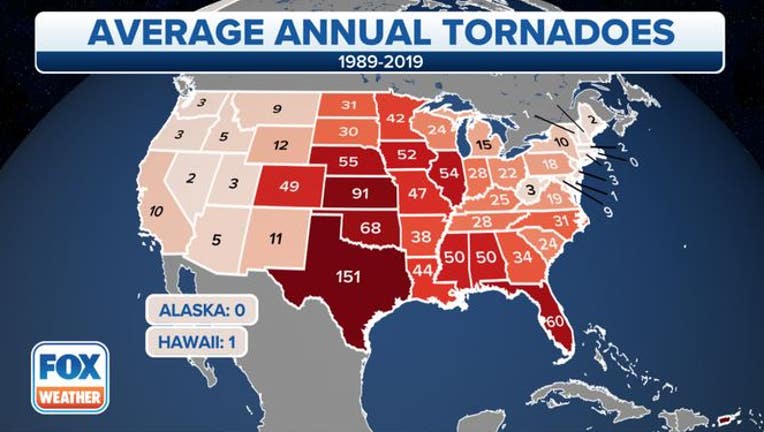 The number in each state denotes its average number of tornadoes each year based on the period from 1989-2019. Data: NOAA/NCEI Storm Events Database. (FOX Weather)

While tornadoes can touch down anywhere in the United States, there are parts of the nation that are more prone to twisters in a typical year.

Using data from the Storm Events Database compiled by NOAA's National Centers for Environmental Information, we can calculate the number of tornadoes every state records in an average year based on the period from 1989 to 2019.

The average annual tornado count for all 50 states is illustrated on the map below, and one thing that probably stands out is the highest averages are found in the heart of "Tornado Alley" in the Central and Southern Plains.

Texas is by far America's most active state for tornadoes, averaging 151 twisters each year. In a distant second place is Kansas, with an annual average of 91 tornadoes.

Rounding out the top five are Oklahoma, with an average of 68 tornadoes per year; Florida, averaging 60 twisters; and Nebraska, which averages 55 tornadoes annually.

Illinois, Iowa, Mississippi and Alabama also see 50 or more tornadoes in a typical year, with averages of 54, 52, 50 and 50, respectively. Colorado comes in just shy of that, with 49 twisters considered average.

Portions of the Northern Plains, Mississippi Valley and South record 30 to 47 tornadoes in an average year.

Between 10 and 28 tornadoes are considered average for parts of the Ohio Valley, Great Lakes, mid-South and Southeast. This is also the case in California, New Mexico and Wyoming.

Most states in the Northeast, Pacific Northwest and Great Basin typically see less than 10 twisters each year.

As a whole, the U.S. averages 1,221 tornadoes annually, of which more than half tend to occur between April and June.