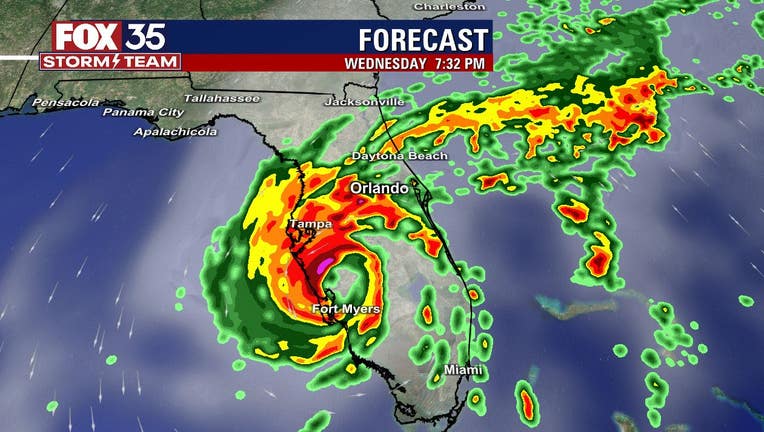 DUNEDIN, Fla. - The Gulf Coast is bracing for impact. The FOX 35 Storm Team Thunder Truck traveled across Pasco, Pinellas, and Hillsborough counties. Our crew found businesses boarding up, people evacuating and anyone hunkered down praying for the best.

Local officials believe Hurricane Ian could be the strongest storm to hit the Tampa Bay area in 100 years with storm surges as high as 10 feet. People up and down the coast lined up to get into sandbag fills.

"They should’ve had bags. They have no sand. No bags," said Jeff Dellaire.

Dellaire stood with a number of others with shovels in hand but nothing to pick up. The sandbag location off of Massachusetts Avenue in New Port Richey struggled to keep up with the demand. A fresh pile of sand lasted less than an hour. Bags were also in short supply, so people resorted to whatever they had on hand.

"Hopefully [my wife] can go to Lowe’s or Home Depot and drive right through here and drop me some bags," said Jose Nunez.

Some volunteers jumped in to help their neighbors.

"When people can come together like that in the community it really makes us feel connected as one," said Jonathan Pohnel. "I feel like we all can survive this hurricane together."

In Dunedin, gas became scarce. Keith Holland stopped by multiple gas stations before finding one that still had fuel.

"It’s getting hard, but we’re holding on," said Holland.

Businesses along US-19 just a block from shore like Seven Sun Brewing are not taking any chances.

"We are in an evacuation zone," said Derrick McKenzie. "We have a 6 PM evacuation mandate so we’re doing our best to get everything ready."

Hillsborough County has called for mandatory evacuations for 390,000 people. Local officials have opened shelters as a last resort for people with nowhere else to go.