ORLANDO, Fla. - Laura has weakened into a tropical storm system after making landfall as a powerful Category 4 storm in southwestern Louisiana.

Laura swamped a low-lying coast with ocean water that forecasters said could be 20 feet deep and unsurvivable.

Winds gusted above hurricane-force to 127 mph (204 kph) while Laura's northern eyewall moved onshore over Cameron Parish, the National Hurricane Center, and forecasters said even stronger winds were possible that could rip apart buildings, level trees and toss vehicles like toys.

The system weakened to a Category 1 hurricane Thursday morning with maximum sustained winds down to 75 mph, the NHC said. It has since dropped even further and is now at 65 mph, making it a tropical storm. 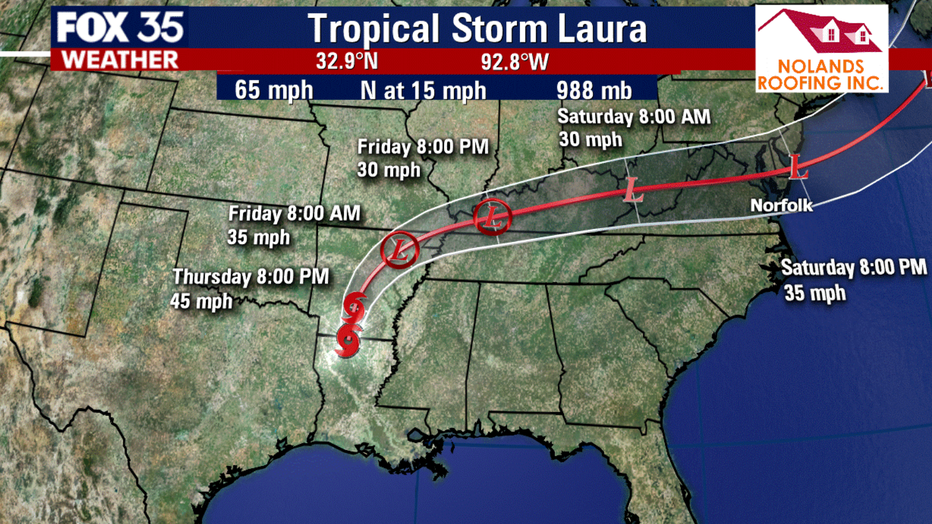 The NHC said that damaging winds and flooding rainfall are spreading inland over Central and Northern portions of Louisiana. High water levels persist along portions of the Gulf Coast. 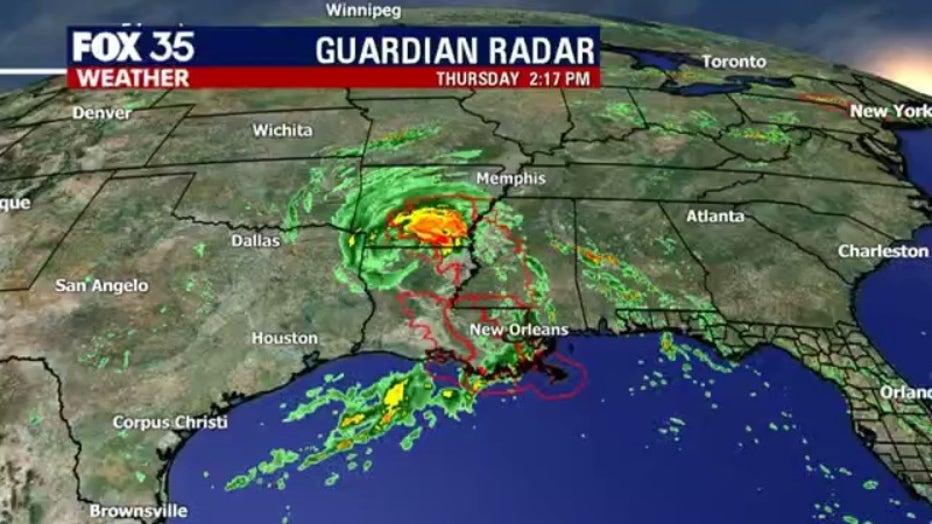 Gov. John Bel Edwards said he’s received report of the first fatality from Hurricane Laura in Louisiana, a 14-year-old girl who died when a tree fell on her home.

Following this, the Governor reported that the storm has taken at least four lives, all of them due to falling trees. He said, "I'm asking that we all lift up these families in prayer."

Authorities had implored coastal residents of Texas and Louisiana to evacuate, but not everyone did before howling winds began buffeting trees back and forth in an area that was devastated by Rita in 2005.

Video and photos on social media showed torrents of rain flying sideways past street lights in Lake Charles, and streets covered with water closer to the coast. A sudden storm surge knocked over cameras meant to capture the hurricane's effects.

Drawing energy from the warm Gulf of Mexico, the system arrived early Thursday during high tide as the most powerful hurricane to strike the U.S. so far this year.

"It looks like it's in full beast mode, which is not what you want to see if you're in its way," University of Miami hurricane researcher Brian McNoldy said.   Hurricane-force winds extending 60 miles (95 kilometers) from the storm's center neared the coast, forecasters said, and bands of heavy rain fell 30 miles (48 kilometers) from the beach in Lake Charles.

Maximum sustained winds increased to 150 mph (241 kph) before nightfall, and forecasters said up to 15 inches (38 centimeters) of rain could fall. Forecasters issued a string of tornado warnings as the storm pushed on to land, but there were no immediate reports of damage. More than 100,000 homes and businesses were without power in Texas and Louisiana.

Hurricane Laura made landfall in Louisiana early on Thursday morning, August 27, bringing powerful winds and an “unsurvivable storm surge,” according to the National Hurricane Center.

A Category 4 hurricane can render wide areas uninhabitable for weeks or months and knock out power for just as long. The threat of such devastation posed a new disaster-relief challenge for a government already straining under the coronavirus pandemic. The parts of Louisiana that were under evacuation orders included areas turning up high rates of positive COVID-19 tests.

The National Hurricane Center kept raising its estimate of Laura's storm surge, from 10 feet (3 meters) just days ago to twice that size -- a height that forecasters said would be especially deadly.  Hurricane warnings were issued from San Luis Pass, Texas, to Intracoastal City, Louisiana, and reached inland for 200 miles (322 kilometers). Storm surge warnings extended from Freeport, Texas, to the mouth of the Mississippi River. 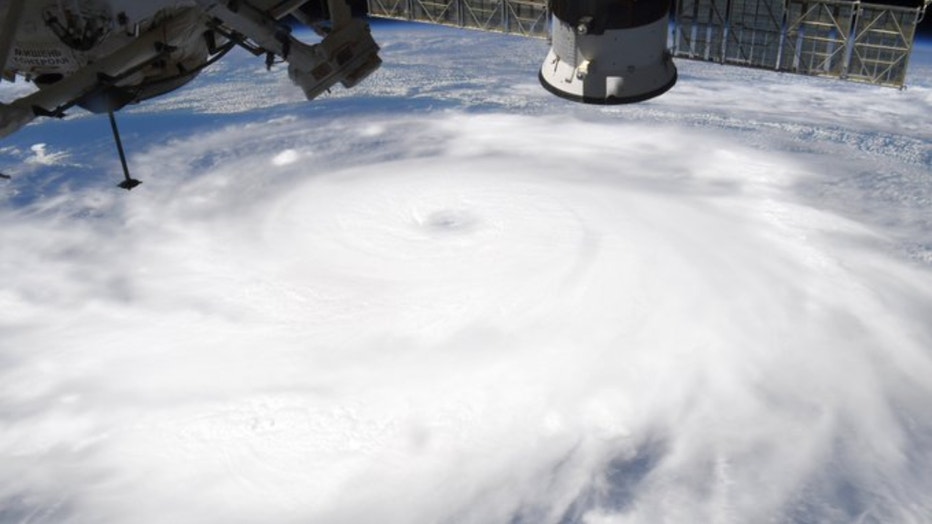 Laura was expected to cause widespread flash flooding in states far from the coast. Flood watches were issued for much of Arkansas, and forecasters said heavy rainfall could arrive by Friday in parts of Missouri, Tennessee, and Kentucky. Laura is so powerful that it's expected to become a tropical storm again once it reaches the Atlantic Ocean, potentially threatening the Northeast.

BE PREPARED: Get your Orlando Hurricane Survival Guide to stay prepared for the 2020 Atlantic Hurricane season

Laura will be the seventh named storm to strike the U.S. this year, setting a new record for U.S. landfalls by the end of August. The old record was six in 1886 and 1916, according to Colorado State University hurricane researcher Phil Klotzbach.

Local power crews head out to help during Hurricane Laura

Central Florida power crews are heading&nbsp;into the path of the storm.