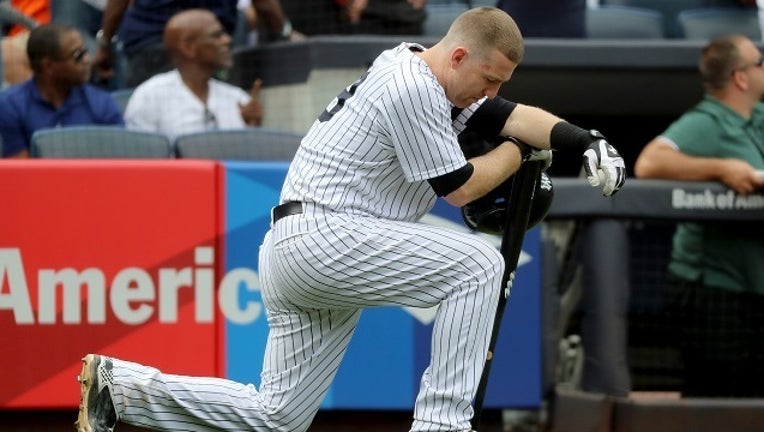 Todd Frazier #29 of the New York Yankees reacts after a child was hit by a foul ball off his bat in the fifth inning against the Minnesota Twins on September 20, 2017 at Yankee Stadium in the Bronx. (Photo by Abbie Parr/Getty Images)

NEW YORK (AP) - A young girl at Yankee Stadium was injured by a 105 mph foul ball off the bat of Todd Frazier during Wednesday's game against Minnesota, leading some players to call for protective netting to be extended.

The Yankees said the girl was taken to a hospital for treatment, and New York manager Joe Girardi said he had been told by team security that she was OK. The game was delayed for about 4 minutes while she was attended to and then carried from the seats in the bottom of the fifth inning.

A shaken Frazier crouched with his hands over his face. The Yankees third baseman then bowed his head, walked away from the plate, crouched again and rested his head on the end of his bat.

"I thought of my kids. I have two kids under 3 years old and I just hope she's all right," said Frazier, who flied out later in the at-bat. "I know the dad or whoever it was that was with them was trying their hardest, but the ball's coming at 120 miles an hour at them and the ball's hooking. So it's like if you've never seen a ball like that, which most people in the world haven't, it's very tough."

Asked whether there should be more netting, Yankees rookie slugger Aaron Judge said: "We need it."

Twins players also were distressed, and second baseman Brian Dozier and the Yankees' Matt Holliday had tears as they said prayers at second base.

"We've been trying to get these teams to put nets up," Dozier said. "Number one, you don't bring kids down there. And number two, every stadium needs to have nets. That's it. I don't care about the damn view of the fan or what. It's all about safety. I still have a knot in my stomach."

As to what it would take to get nets up, Dozier responded: "The last resort that we don't ever want to have happen. I'm not going to say it, but you know what I'm talking about."

Speaking through a translator, Twins infielder Eduardo Escobar said, "I just saw blood coming out of this little girl." He said perhaps kids under a certain age be prohibited from seats without protection.

Major League Baseball issued recommendations for protecting netting or screens in December 2015, encouraging teams to have it in place between the ends of the dugouts closest to home plate.

"It remains an ongoing discussion in the industry," Commissioner Rob Manfred said at Safeco Field, before Wednesday night's game between Seattle and Texas. "We gave some guidelines two years ago, and what we have done since then is that we have encouraged the individual clubs to engage in a localized process, look at their own stadiums - every stadium's different - and to try to make a good decision about how far the netting should go in order to promote fan safety."

"If you look at what's happened, there has been a continuous focus forward movement in terms of increased netting in stadiums around the leagues and I expect that process will continue this offseason," he said.

The Mets extended netting beyond the outfield ends of the dugouts this season after the All-Star break. The Yankees said in an August statement posted on the team's website that they "are seriously exploring extending the netting prior to the 2018 season."

A boy was struck on the head by a portion of Chris Carter's broken bat at Yankee Stadium on May 25, and a fan sitting beyond the first-base dugout was hit by a 105 mph foul ball off the bat of Judge on July 25. That fan had a bloody bandage around his head as he left his seat.

New York City Councilman Rafael L. Espinal Jr. introduced legislation in May for protective netting to be extended to the ends of both dugouts, and a hearing is scheduled for Oct. 25.

"No one should ever go to a baseball game and leave severely injured," Espinal said in a statement. "Nor should any player have to feel the guilt associated with injuring a fan, especially when that injury could have been prevented by safety nets."

"I think the netting should be up. I think every stadium should have it, but we're not at that point yet," Frazier said. "Hopefully, they took a look at all this and they figure something out."

Girardi recalled a fan being badly injured while he was catching for the Chicago Cubs and said new ballparks "are more intimate" with "fans closer to home plate."

"I'm for making everything as safe as possible for everyone at the ballpark - players, too," Girardi said.