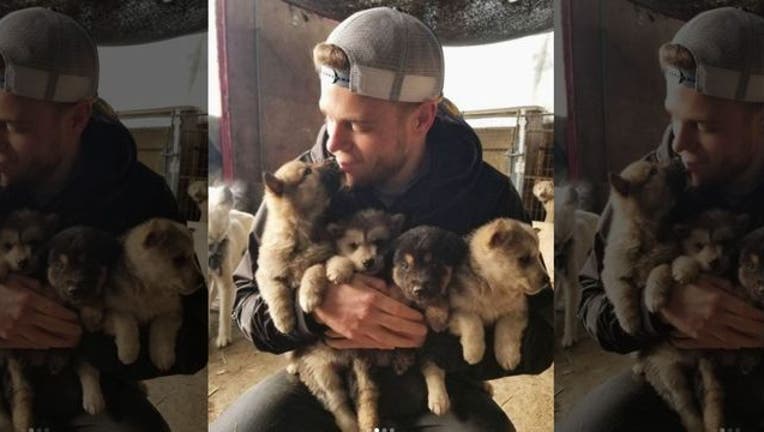 The skier, who brought home two puppies he discovered near the Olympic Village in Sochi, Russia, found some new furry friends while touring one of South Korea’s 17,000 dog meat farms.

In a long Instagram post filled with heart-wrenching pictures of sad-looking dogs in cages, Kenworthy talks about the visit he made with his boyfriend, actor Matthew Wilkas, late last week.

“Across the country there are 2.5 million dogs being raised for food in some of the most disturbing conditions imaginable. Yes, there is an argument to be made that eating dogs is a part of Korean culture,” Kenworthy, 26, wrote in the post.

Kenworthy continued: “And, while don't personally agree with it, I do agree that it's not my place to impose Western ideals on the people here. The way these animals are being treated, however, is completely inhumane and culture should never be a scapegoat for cruelty.”

Although the skier says he was told that the animals at this particular farm were kept in “good conditions,” he found them to be malnourished and exposed to the elements while stuffed into tiny cages.

According to Kenworthy -- who didn’t podium this year after being sidelined by a broken thumb and a gross-looking hematoma -- the farm he visited is being shut down and all 90 of the dogs currently living there will be flown to the United States and Canada, with assistance from Human Society International, where they will be put up for adoption.

“I’m hoping to use this visit as an opportunity to raise awareness to the inhumanity of the dog meat trade here in Korea and the plight of dogs everywhere, including back home in the US where millions of dogs are in need of loving homes! Go to @hsiglobal‘s page to see how you can help,” he writes at the end of his post.