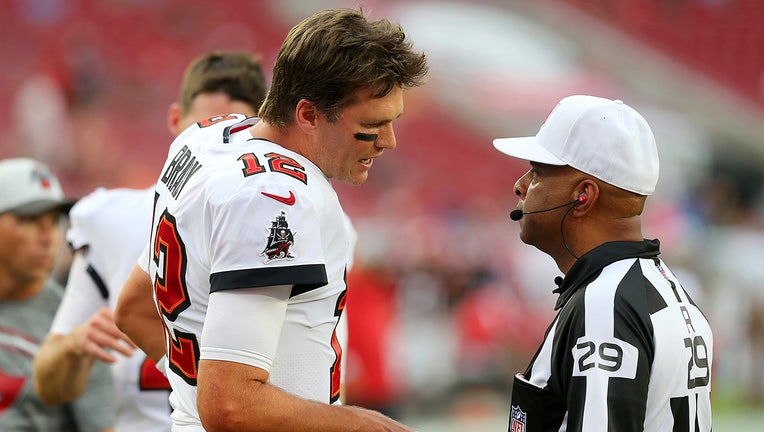 Tom Brady of the Buccaneers talks with Referee Adrian Hill before the preseason game between the Cincinnati Bengals and the Tampa Bay Buccaneers on August 14, 2021 at Raymond James Stadium in Tampa, Florida. (Photo by Cliff Welch/Icon Sportswire via

TAMPA, Fla. - Tom Brady expressed his outrage this week about the NFL’s rule change allowing players to switch their jersey number to single digits as his Tampa Bay Buccaneers prepare to play the Dallas Cowboys.

Brady called the numbers rule "crazy" in an interview with the Tampa Bay Times and appeared to be pessimistic about how the team was going to game plan against Dallas. He said the same thing in April in an Instagram post, calling the rule change "bad for football."

The Cowboys had a few players switch their numbers before the start of the 2021 season.

Brady has never lost against the Cowboys. He has thrown for 1,354 passing yards and 10 touchdown passes against them. He finished his 2020 season on a riveting note, throwing multiple touchdown passes in the team’s blowout over the Kansas City Chiefs in the Super Bowl.

It will be interesting to see whether the numbers change really affects his teammates or whether he was just blowing smoke ahead of the first game of the season.