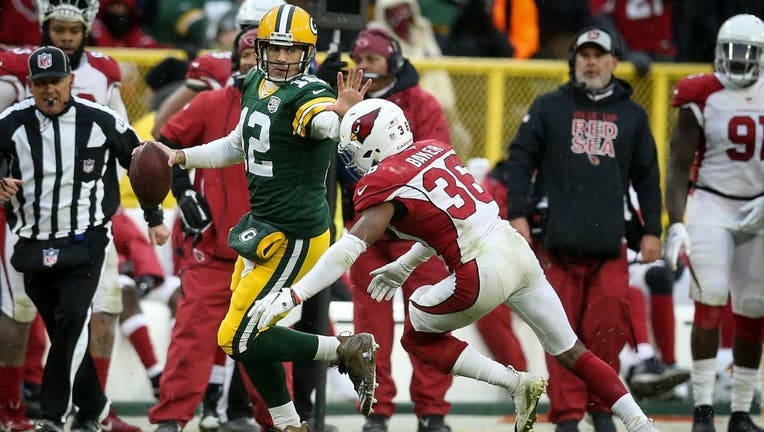 GREEN BAY, WISCONSIN - DECEMBER 02: Aaron Rodgers #12 of the Green Bay Packers runs with the ball while being chased by Budda Baker #36 of the Arizona Cardinals in the fourth quarter at Lambeau Field on December 02, 2018 in Green Bay, Wisconsin. (Pho

GLENDALE, Ariz. - Given the records of the Arizona Cardinals and Green Bay Packers, one could be forgiven for thinking Thursday night’s game is a preview of this year’s NFC Championship Game.

The Undefeated Cardinals are hosting the one-loss Packers at State Farm Stadium. Arizona is 7-0 for the first time since the 1974 season. Their combined margin of victory is 111 points, the best in the NFL.

The Packers got dominated by the New Orleans Saints in their season opener, but have pulled off six straight wins — a streak only bested by the Cardinals.

Spectacular quarterback play has propelled both teams to success. Cardinals quarterback Kyler Murray boasts the best completion rate in the league at 73.5%. And Aaron Rodgers has tossed 15 touchdowns and just one interception during the Packers’ winning streak.

The question is how well either offense performs when matched against these stout defenses.

Green Bay has historically dominated Arizona. The Packers have defeated the Cardinals 45 times and only lost 26 of their meetings.

Even so, recent history has been on Arizona’s side. The Cards have bested the Pack in their previous three meetings. And the Packers have not topped the Cardinals since 2012.

The season is still young, but whoever wins Thursday night will have the inside track to that coveted bye week in the first round of the playoffs. It could also determine who gets home-field advantage in the postseason.

Playing the Packers in Green Bay in January would be less than ideal for a Cardinal squad used to playing its games in a dome in the desert.