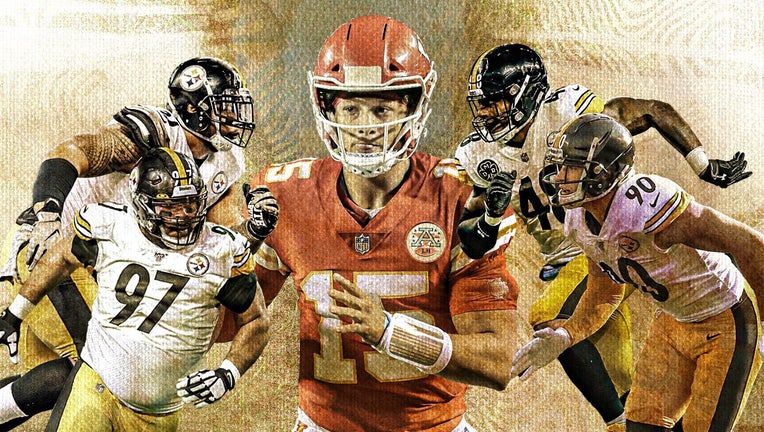 Check out the best wagers for week 4 of the NFL season.

LOS ANGELES - It’s already Week 4 of the NFL season. It feels like training camp just started, and now we are almost a quarter of the way through the year. Teams are starting to show who they are, so it’s time we prepare to wager that way.

Here are my favorite bets for Week 4 (with all odds via FOX Bet).

After the Chiefs thoroughly dismantled the Ravens on Monday Night Football, it would seem like the champs have an easy run back to the Super Bowl. I’d agree with that, but I’ll also tell you to watch out for the 3-0 Pittsburgh Steelers.

Unless Patrick Mahomes is hurt – and we’d never wish for that – you must have a defense that can slow down the Chiefs enough to allow your own offense to try to keep pace. The Steelers are the only team in the AFC with a shot at that.

We saw Monday night – and we already knew this, but Baltimore was stubborn anyway – that bringing pressure via the blitz is NOT the way to stop Mahomes. He recognizes the pressure and will find the open hole in the defense, or find the right one-on-one matchup against man coverage. It’s a silly way to play the Chiefs offense.

The only teams that have shut down Mahomes for any length of time are the Niners in the Super Bowl and the Chargers in Week 2. Besides the similarity of both teams having a Bosa brother rushing on the edge, they both play zone coverage, primarily Cover 3, AND most importantly, can pressure the quarterback with just their pass rush.

The Steelers led the NFL in pressure rush via the pass rush last season and they have continued with a strong start in 2020, ranking first in pressure rate after three weeks. The Steelers are primarily a zone coverage team, which again, doesn’t completely contain Mahomes, but it keeps everything in front of them.

Lastly, when you play the Chiefs, you must score along with them. The Steelers offense has been hit or miss this season as they work in a new offensive coordinator and Big Ben returns from elbow surgery. It’s a work in progress. It takes eight to 10 regular-season weeks to get a new offense humming, and it hasn’t even been a month yet.

Come January, Pittsburgh's offense will be playing at a level where it can keep up with the Chiefs.

This is a square Joe pick, but it’s the right side. Baltimore was embarrassed on Monday night, and I love riding with veteran teams off blowout losses. Their pride won’t allow them to have back-to-back stinkers, especially against a Washington Football Team that is two bad quarters away from having a switch at quarterback.

Ron Rivera isn’t happy with the play of Dwanye Haskins, who is dead-last in completion percentage and passer rating since he became the full-time starter in Week 9 last season. His prospects to improve aren’t bright against a pressure-heavy Ravens defense. Pressure can torture a young quarterback, and I expect that to continue Sunday.

And yes, Washington has a surprisingly efficient defense led by its pass rush. However, Washington is likely to be without rookie defensive end Chase Young, whose absence will hurt their efforts to hit Lamar Jackson. Lastly, Washington’s defense is poor against the run, coming in 25th in yards-per-carry allowed. Baltimore will run all over them.

After a predictable opening day fiasco against the Saints, the Buccaneers have rebounded as I expected. As Tom Brady gets more comfortable in the offense, the Bucs will continue to increase their level of play, as we saw last weekend in an efficient game at Denver.

The Buccaneers finished last season with a top five defense, and that has continued through the first three weeks of 2020, as they rank second in defensive DVOA. It’s a balanced defense, which is stout against both the run and pass. But this Sunday, it will be all about the pass rush.

Chargers rookie quarterback Justin Herbert is making his third start and his first on the road. This is by far the best defense he will have faced and one that will generate pressure. Rookie quarterbacks, heck even veteran quarterbacks, struggle against pressure. Tampa Bay has a fierce pass rush, coming into the game with the fourth-best pressure rate. The Chargers offensive line, which is banged up, ranks 28th in pass protection according to Pro Football Focus.

Last weekend, the Panthers forced a strip sack and hit Herbert plenty. I’d take a peek at Justin Herbert’s under for passing yards as well.

This one is simple. The Rams have an outstanding passing attack, ranked third by PFF and fourth in DVOA. Jared Goff is hovering around the top five in most advanced stats, including Expected Points Added.

The Rams will be facing a Giants pass defense that has been poor, ranking 26th in coverage and 30th in DVOA. New York boasts the fourth-best rushing defense, so I expect the Rams to lean into the passing game early and often.

Cleveland is a better football team right now than Dallas. The Cowboys are lucky to even have a single victory, as they beat the Falcons on that fluke onside kick recovery. The Dallas defense couldn’t stop me or you from scoring, and the Browns offense has quietly put up back-to-back strong performances. They just scored 34 points against a stout Washington defense. The week before, they scored 35 against the Bengals, who believe it or not, have the ninth-ranked defense.

The Browns will move the ball Sunday, led by an offensive line that has been surprisingly great at pass protection. When Baker Mayfield has time, he can sling it. No more happy feet in the pocket.

Flipping the field around, we know the Cowboys offense can put up points. But they are playing an actual defense this weekend.

The Browns rank sixth in pass rush and 12th in coverage (PFF). Cleveland needs just a few stops to score enough points to cover this game. No one will be taking the Browns, which is another reason I love this game. It’s a sharp play.