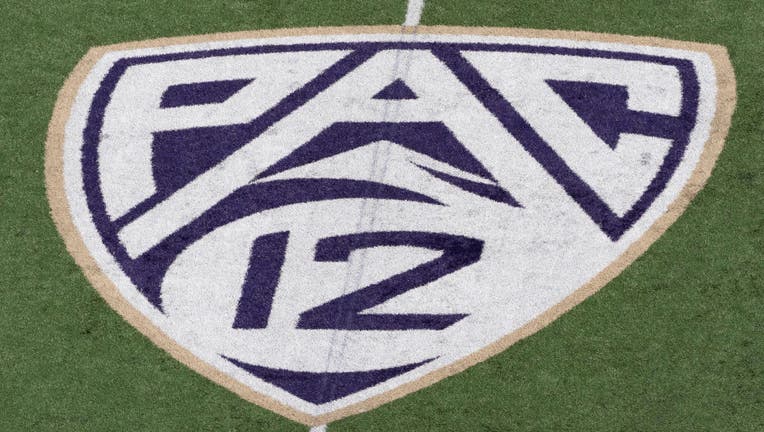 SEATTLE, WA - APRIL 27: A view of the PAC12 logo before the University of Washington Spring Game at Husky Stadium on Saturday, April 27, 2019 in Seattle, WA. (Photo by Joseph Weiser/Icon Sportswire via Getty Images)

The Pac-12 said Thursday it will stand pat with its membership and not look to expand the 12-team conference, making it highly unlikely that the Big 12 schools being left behind by Texas and Oklahoma will find new Power Five homes.

The announcement comes two days after the Pac-12, Atlantic Coast Conference and Big Ten pledged to work together on governance issues and scheduling agreements in football and basketball.

The formation of a three-conference alliance came a little less than a month after the Southeastern Conference invited Texas and Oklahoma to join the league in 2025. The move would coincide with the end of the Big 12′s current television contract.

With Pac-12 expansion off the board, and both the ACC and Big Ten stating publicly that they are content with their current membership, the eight remaining Big 12 schools appear to have limited options beyond sticking together.

"The decision by Texas and Oklahoma led to significant instability in college athletics and I don’t think instability is good for college athletics, particularly given all the other issues that are facing us right now," Pac-12 Commissioner George Kliavkoff told The Associated Press. "I think you heard my colleagues in the ACC and Big Ten agree with that position that we need to bring a stability back to college athletics."

The past few months have brought a wave of significant events in college sports, from a stinging Supreme Court ruling in an antitrust case to the advent of college athletes as paid sponsors.

Meanwhile, the NCAA is in the process of sweeping reform as it tries to redefine its mission and there is a proposal in the pipeline to expand the College Football Playoff from four to 12 teams.

The SEC’s move to add OU and Texas led to widespread speculation that it could trigger a wave of conference realignment across the rest of the Power Five.

Just days after the planned move of Texas and Oklahoma became official, Kliavkoff and Big 12 Commissioner Bob Bowlsby met and discussed whether the the Pac-12 and Big 12 could possibly work together to benefit each conference. Nothing ever came of that, and the Big 12 was left out of the alliance.

Between the alliance and the Pac-12′s standing pat, the threat of widespread school poaching seems to have subsided — at least until the Big 12 decides its next move.

The Pac-12 appears positioned to reap some of the benefits of expansion, such as games in the Central and Eastern time zones and exposure to new recruiting territory, through the alliance with the Big Ten and ACC.

Kliavkoff had openly talked recently about how the conference had a group of athletic directors and university presidents analyzing the possibility of expansion, and that their work would be finished soon.

Kilavkoff declined to say which schools had reached out to the Pac-12 about membership, or even how many. He said part of creating the stability the alliance is aiming for included coming to a quick and transparent decision on expansion.

"We did the work necessary to determine that we were happy with our current makeup and that we think we can thrive with 12," Kilavkoff said. "It was a unanimous vote of our presidents and chancellors to stay at 12."