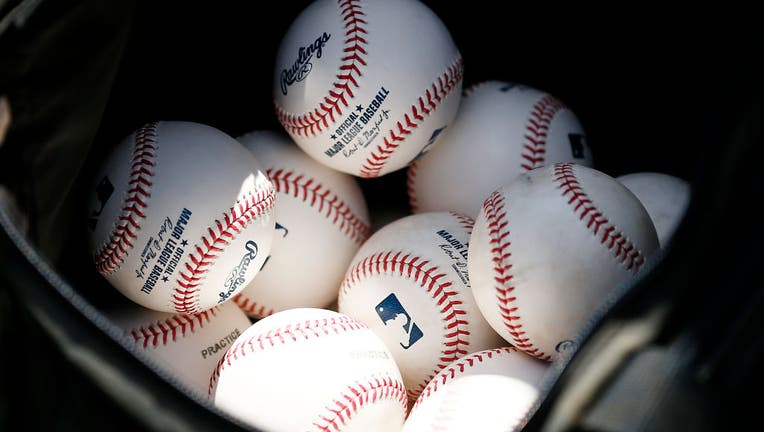 VARIOUS CITIES, - MARCH 12: A detail of baseballs during a Grapefruit League spring training game between the Washington Nationals and the New York Yankees at FITTEAM Ballpark of The Palm Beaches on March 12, 2020 in West Palm Beach, Florida. Many pr

There was no crack of the bat, no footlong hot dogs, no umpire's cry of "Play ball!" as opening day came and went for Major League Baseball with games indefinitely postponed by the coronavirus pandemic.

Stands and parking lots were deserted and ticket windows closed at stadiums from New York, the United States' worst virus hotspot, to San Francisco's Oracle Park, home of the Giants, where security guard LeJuana Evans wore a black jacket and beanie and a white face mask while minding the gate.

Humans were all but absent at the sporting cathedrals where America's pastime should have kicked off Thursday.

In Seattle, a lone grounds crew worker mowed the emerald infield of T-Mobile Park, while in Cleveland, Jason Hackedorn gazed through the shuttered gates of Progressive Field.   In their place stood lonely statues of past legends: Ted Williams, bat resting on his shoulder, placing a cap on the head of a child outside Boston's Fenway Park; Ken Griffey Jr., frozen post-swing in Seattle as if watching the ball clear the center-field fence; the foursome of Tiger greats Hal Newhouser, Charlie Gehringer, Hank Greenberg and Ty Cobb crowning left field in Detroit's Comerica Park.

League officials have not set a date for when opening day may happen for real.