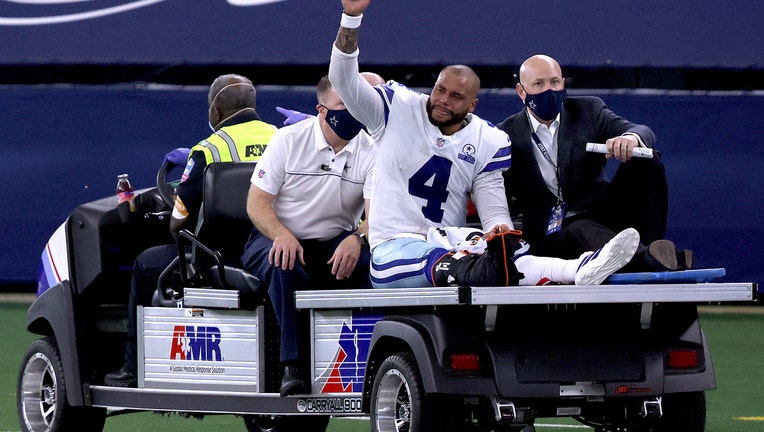 Dallas Cowboys quarterback Dak Prescott is carted off the field after sustaining a leg injury against the New York Giants during the third quarter at AT&T Stadium on October 11, 2020 in Arlington, Texas. (Photo by Tom Pennington/Getty Images)

Dallas Cowboys quarterback Dak Prescott was carted off the field after suffering a gruesome lower-leg injury in a game against the New York Giants on Sunday.

The injury occurred midway through the third quarter, as Prescott attempted to evade the Giants defense while scrambling.

Prescott was in tears as he left the field on the cart, but he did raise a fist as he was driven to the locker room.

The Cowboys QB was taken to a local hospital, where his brother shared a photo of the two shortly after the game.

According to multiple reports, Prescott is set to undergo surgery Sunday night.

Prescott's former coach, Jason Garrett, who is now a member of the Giants coaching staff, immediately made his way onto the field to check on the Cowboys QB.

And on a subsequent Cowboys possession, Ezekiel Elliott showed his support for Prescott when he scored a touchdown.

In the end, Dallas won the game 37-34 on a last-second field goal, as Cowboys players dedicated the victory to their quarterback.