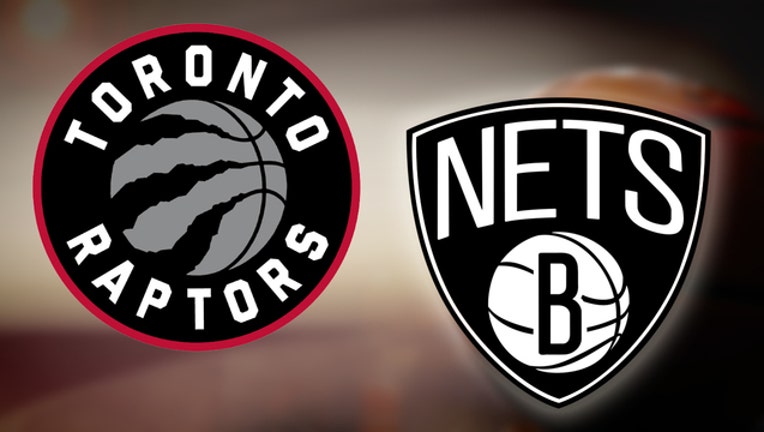 Serge Ibaka finished with 23 points and 12 rebounds for the Raptors (56-23), who need to win their final three games to match last season's franchise record for victories. Their victory prevented the Milwaukee Bucks from clinching the No. 1 seed in the Eastern Conference.

D'Angelo Russell had 27 points, seven rebounds and six assists for the Nets, who fell to 39-39 and missed another chance to improve their playoff situation. They came into play seventh in the East but could have moved ahead of Detroit after the Pistons fell in Indiana.

Brooklyn has lost four of five.

The Nets had cut the deficit to five early in the third quarter before Siakam made a pair of baskets around Marc Gasol's 3-pointer to make it 66-54. Toronto would get the lead as high as 14 points in the quarter and led 90-78 entering the fourth.

Russell tried to jump-start a rally early in the fourth, scoring seven straight Brooklyn points to trim it to 92-87. The Nets were still down only five midway through the period, but Siakam, Ibaka and Kyle Lowry made 3-pointers over a span of 1:40, before two free throws by Ibaka and another by Siakam pushed it back to 108-96 with 3:15 to play.

Russell had one more flurry, making three 3-pointers to cut it to 110-105 with 1:24 left, but Ibaka scored on a follow shot and the Nets couldn't get anything else to fall.

Nets: Russell scored 20 points in all four meetings with Toronto this season. ... Caris LeVert was just 1 for 9 for three points.

Raptors coach Nick Nurse said his plan is to play Leonard in their three remaining games. The Raptors have carefully managed the All-Star forward's workload after he was limited to just nine games in San Antonio last season because of a thigh injury, but Nurse said Leonard wants to play to build a rhythm for the postseason.

Nets coach Kenny Atkinson said he watched on his phone when Theo Pinson made a 3-pointer with 0.4 seconds remaining Tuesday to send the Long Island Nets past Lakeland in overtime and into the NBA G League Finals. Pinson, signed by Brooklyn to a two-way contract, often leads the cheers from the bench and Atkinson said it was "poetic justice" that he was the one to hit the winner. "Thrilled for him, thrilled for Long Island going to the finals," Atkinson said. "It really sets up a positive kind of note, just on our program."