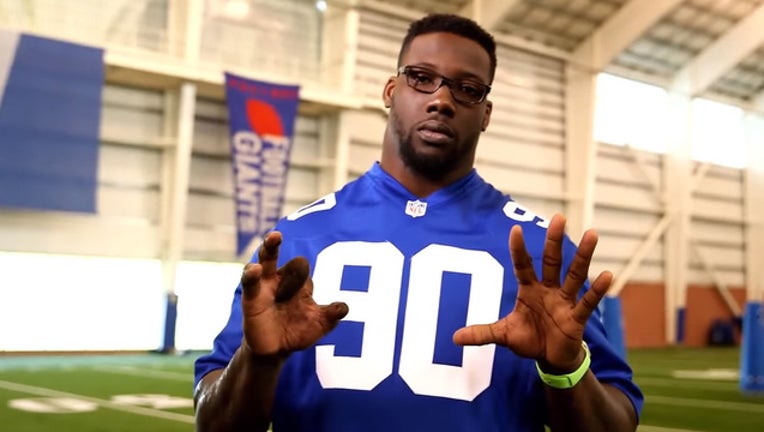 EAST RUTHERFORD, N.J. (AP) - Almost a year after mangling his right hand in a fireworks accident, New York Giants defensive end Jason Pierre-Paul has made a public service announcement about keeping children away from fireworks, and warning everyone to handle the pyrotechnic devices with care.

Pierre-Paul lost an index finger and part of his thumb, and was required to have reconstructive surgery to save his middle finger, when a device exploded in his hand on July 4. The two-time Pro Bowler missed half of last season because of the injury, and he struggled using the hand when he returned because he wore a boxing-like glove playing. It limited his ability to grab opponents.

In the public service announcement, there is a reenactment of Pierre-Paul's accident. He tells Kaye that he lit a device and it blew up almost immediately. It is followed by a picture of his severely damaged hand, another of him in the hospital with his hand bandaged, and one of the football player and his young son.

Pierre-Paul discusses the accident with Kaye and admits he is lucky to be alive.

Their 45-second message to the public is to practice fireworks safety by keeping children away from fireworks, leaving fireworks use to professionals and practicing caution with consumer fireworks.

The announcement was released days before Independence Day because the consumer product safety commission said that 70 percent of all injuries with fireworks occur during the 30 days surrounding the holiday. There were 11 deaths and nearly 12,000 injuries treated in emergency rooms from fireworks in 2015 — the highest number in 15 years, according to the commission.