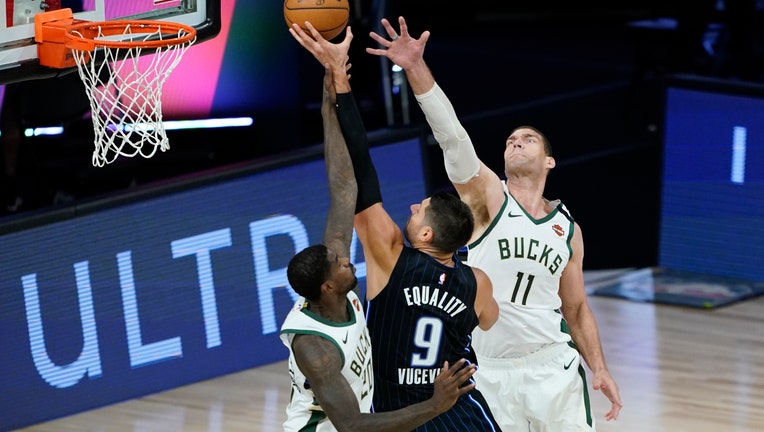 LAKE BUENA VISTA, FLORIDA - AUGUST 24: Nikola Vucevic #9 of the Orlando Magic drives to the basket between Marvin Williams and Brook Lopez #11 of the Milwaukee Bucks during the second half of an NBA basketball first round playoff game at The Field Ho

Vucevic got an emotional lift prior to tipoff when news broke that the center was chosen as a reserve for the March 7 All-Star Game. The 7-footer, Orlando’s only all-star since 2012 and its sixth multi-time all-star, came into Tuesday averaging a career-best 24.1 points and 11.7 rebounds.

The 70th NBA All-Star Game will take place in Atlanta, Georgia, with on-court action beginning at 6:30 p.m. ET and televised on TNT. Vucevic and the rest of the All-Star reserves were selected by NBA head coaches.

It marks the second time that Vucevic has been selected as an NBA All-Star during his career. He also earned NBA All-Star honors in 2019.

Vucevic’s biggest area of improvement has been his 3-point shooting. Not only did Vucevic enter Tuesday shooting a career-best 40.5% from 3-point range; he also had already hit 79 shots from beyond the arc — just 19 fewer than his career-best total.