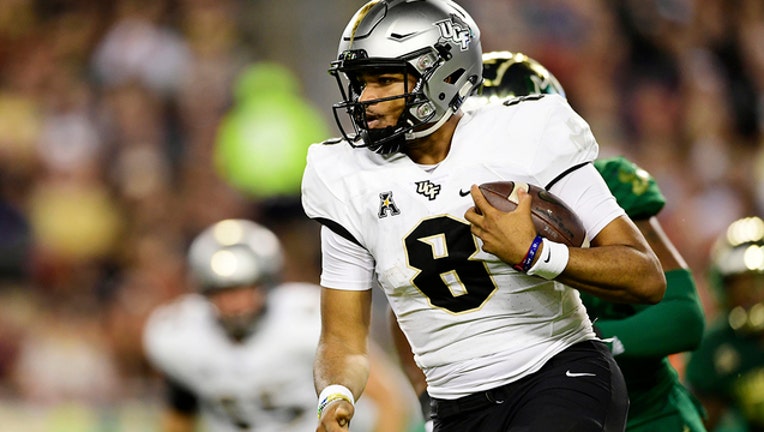 Darriel Mack Jr. #8 of the UCF Knights runs the ball for a 7-yard gain in the third quarter against the South Florida Bulls at Raymond James Stadium on November 23, 2018 in Tampa, Florida. (Photo by Julio Aguilar/Getty Images)

A win would make the Knights eligible for a New Year's Six bowl bid, keep them in the conversation for a spot in the four-team College Football Playoff and extend the nation's longest winning streak to 25 games.

It won't be easy to do it without QB McKenzie Milton, who suffered a severe leg injury in the Knight's regular-season finale against South Florida.

Memphis has won four straight to overcome a 1-3 conference start and win the AAC West Division for the second straight year. The Tigers lost a 62-55 double-overtime thriller to UCF in last year's title game and gave the Knights their toughest game this season, losing 31-30 at home after leading by 13 at the half on Oct. 13.

With Milton out, redshirt freshman QB Darriel Mack, Jr. will make his second start of the season for UCF. The Knights have been one of the most balanced teams in the country offensively, though losing Milton may force them to be a little more reliant than usual on RBs Greg McCrae and Adrian Killins, Jr.

Mack's been more effective as a runner than a passer, but the Knights have not needed him to throw much while filling in for Milton, who repeated as AAC offensive player of the year. McCrae has rushed for 895 yards and eight TDs, and Killins has run for 698 yards and four TDs.

This is the fourth meeting between the teams in two seasons. UCF has beaten the Tigers 12 consecutive times. Memphis is 0-6 against the Knights in Orlando. The Tigers' lone win in the series came at home in 1990. ... Last year's AAC championship game, also played in Orlando, was the highest scoring conference title game in FBS history. The Knights and Tigers combined for 117 points and 1,479 yards total offense.